When did the dispute over Ram Janmabhoomi start and why did it take so long for a resolution?

The verdict is out. A five-judge Bench of the Supreme Court has allowed the construction of a temple in the Babri Masjid-Ram Janmabhoomi site in Ayodhya, while ordering the grant of a five-acre plot to the U.P. Central Sunni Wakf Board for the construction of a mosque. Behind this judgment is a 70-year-long litigation, which, in turn, was foreshadowed by a legal dispute, albeit settled quickly, in the 19th century. The legal battle over the possession of a 2.77-acre piece of land is now over.

Here is a backgrounder on the suits, issues and developments that led up to the Allahabad High Court verdict of 2010.

This judgment by a Full Bench of the Allahabad High Court had ordered a three-way partition of the disputed area among the deity, Ram Lalla and his ‘janmasthan’, the Nirmohi Akhara, an old order of Hindu saints that was maintaining a part of the area outside the now-demolished Masjid, and the Muslim parties. However, the Supreme Court on Saturday dismissed the remedy fashioned by the High Court as one that “defied logic”. 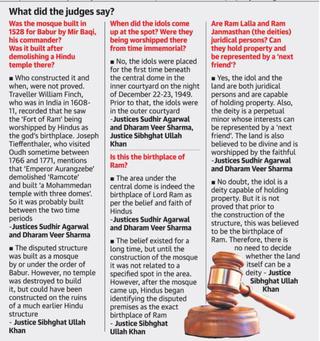 What is the crux of the dispute?

At the crux of the matter is the belief among sections of Hindus that the Babri Masjid, names after Mughal emperor Babur, was built in Ayodhya after destroying a Ram Temple that marked the birthplace of the deity. The Hindu parties wanted the land to themselves, contending that Lord Ram was born at a spot on which later the central dome of the mosque was built. The Muslim parties, however, contended that the mosque was constructed in 1528 by Mir Baqi, a commander of Babur’s army, without demolishing any place of worship and since the land rights had not been transferred to any other party, the space was rightfully theirs.

Who took the matter to court? What did they want?

The matter went to court as far back as 1885. Mahant Raghubar Dass filed a suit as “mahant of the janmasthan” for permission to build a temple on a 17 feet x 21 feet Chabutra (platform) outside the mosque. The Sub-Judge, Faizabad, dismissed the suit. On appeal, the District Judge also dismissed it. The dispute did not go to courts for many decades and was continuously in the possession of Muslims. However, a large crowd of Hindus entered the premises on the night of December 22-23, 1949 and planted idols of Ram surreptitiously under the central dome. Six days later, the City Magistrate, Faizabad, attached the premises and handed it over to an official receiver. 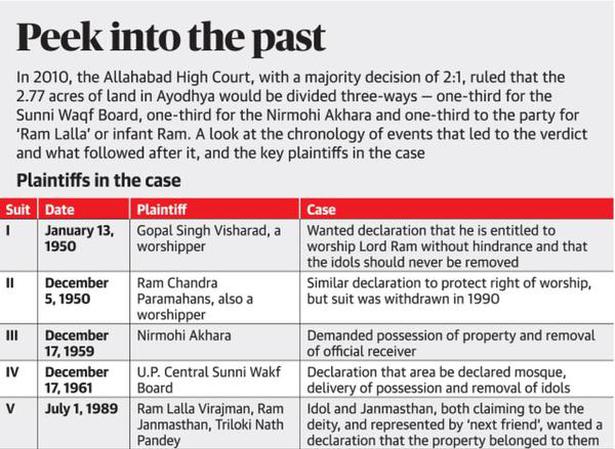 In January 1950, Gopal Singh Visharad, a local devotee, filed a suit asserting his right to worship at the birthplace of Ram and seeking an injunction against the administration and Muslim residents from interfering with that right. An interim order was passed in his favour against the removal of the idols. This order survives to this day. A similar suit was filed by Ram Chandra Paramahans late in 1950, but it was withdrawn in 1990. The Nirmohi Akhara, said to be an age-old institution of Ramanand Vairagis based in Ayodhya, filed a third suit in 1959, seeking removal of the official receiver and asking for the premises to be handed over to itself and its mahants. Muslim parties entered the picture in December 1961, when the Uttar Pradesh Central Sunni Wakf Board filed a suit, asserting that the mosque was a public wakf for over 400 years and seeking that the premises, including the mosque and a public Muslim graveyard in the vicinity, to be handed over to it.

After the ‘Ram Janmabhoomi’ movement, spearheaded by the Vishwa Hindu Parishad (VHP) and supported by the Bharatiya Janata Party (BJP) gathered momentum in the late 1980s, a fifth suit was filed by the ‘deity’ itself. Interestingly, there were three plaintiffs, Ram Lalla, the presiding deity, Ram Janmasthan, the birthplace being considered a divinity in itself, and the believer/worshipper who represented the two deities.

What were the landmark events over the years?

If the surreptitious planting of the idols in 1949 was the most notable event that revived the dispute in the last century, there were other flashpoints too. On February 1, 1986, a local court ordered that the locks be opened for Hindu worshippers. This order gave a big push to the temple movement. The BJP and the VHP thereafter began mobilising people all over the country, and repeatedly fixed dates for marching on the disputed site. There were ‘shilanyas’ processions (to carry consecrated bricks from across the country to be used in the construction) as well as gatherings of ‘kar sevaks’ (volunteers to build the temple). A belligerent onslaught on a heavily barricaded Ayodhya town resulted in the police opening fire on ‘kar sevaks’ in 1990. The incident led to the BJP withdrawing support to the V.P. Singh government. In between, the Allahabad High Court passed an order transferring all the suits to itself and ordering a consolidated hearing before a Full Bench of three judges.

BJP leader L.K. Advani led a ‘rath yatra’ across several States, leaving a trail of communal violence. Ultimately, the aggressive mobilisation resulted in the destruction of the masjid on December 6, 1992, despite the assurances given by the BJP government of Kalyan Singh. On January 7, 1993, the Centre issued an ordinance taking over the entire disputed area and the land close to it, and declared that all the suits would abate. This was later replaced by the Ayodhya Acquisition Act, 1993. However, by a verdict on October 10, 1994, the Supreme Court revived the title suits, and modified the acquisition to the effect that the Centre would not be the owner, but the Receiver of the land and would dispose of the land in terms of the final judgment in the suits.

From the ‘surreptitious’ planting of idols of Ram Lalla under the central dome of the Babri Masjid in 1949, the opening of the locks of the mosque in 1986 for Hindu worshippers and the 2010 Allahabad High Court verdict dividing the disputed land among three plaintiffs, the case had several landmark moments. The Mughal-era mosque was demolished by a mob of Hindutva activists on December 6, 1992.

What do the people of Ayodhya want?

The people of Ayodhya-Faizabad have been waiting for an end to the dispute. Opinions in the town mirror communal and ideological divisions; but what most residents agree upon is the stagnation or lack of development, despite the town being located just 125 km from the State capital.

Lack of jobs and investment, poor infrastructure and an underdeveloped tourism economy have kept Ayodhya far behind other important Hindu religious centres like Mathura and Varanasi.

Over the past years, especially since the RSS-VHP led movement swept much of north India, Ayodhya became the centrestage for communal politics and a tool for polarisation before elections. The high-pitched events not only disrupted daily life and business, but also endangered communal harmony in the region.

Was the possibility of a settlement explored?

There were several sustained attempts at talks, including at the highest level of two Prime Ministers Chandra Shekhar and P.V. Narasimha Rao. Religious leaders also came into the picture, but all efforts to bring about an out-of-court settlement failed. In the latest exercise, a mediation panel constituted by the Supreme Court also could not end the stalemate.

Given that there were multiple parties on both ends in the legal dispute, including the VHP-RSS led seers, a settlement — apart from the surrender of the disputed land by the Muslim side — has always sounded unimaginable. A group of prominent Muslims led by retired general Zameer Uddin Shah recently advocated that the Muslims give up their claim as a token of goodwill, while arguing that even if the minority community prevails in court, it would be next to impossible for them to re-build a mosque at the site. The All India Muslim Personal Law Board, one of the parties, however, rejected this proposal, saying the status of the land on which the Babri Masjid stood cannot be “altered, changed or transferred in any manner”.

The Muslim side fears that if the claim is ceded in Ayodhya, it could trigger similar demands in places such as Varanasi and Mathura. The VHP, on the other hand, had regularly insisted that the entire land be handed over to the Hindus and that a division of the title, such as the one the Allahabad High Court ordered, was not desirable.

Amid US tension, Iran builds fake aircraft carrier to attack