The presidents of Colombia, Chile and Paraguay were on hand to be the first foreign heads of state to embrace the 35-year-old lawmaker Guaido since he declared himself interim president a month ago at an outdoor rally.

Defying orders banning him from leaving Venezuela, opposition leader Juan Guaido made a surprise appearance at the end of star-studded aid concert in neighboring Colombia, joining thousands of other Venezuelans in pressuring President Nicolas Maduro into allowing the delivery of emergency food and medicine.

In Venezuela, a much smaller crowd gathered for a rival, three-day “Hands Off Venezuela” festival being organized by Mr. Maduro. Even as several million Venezuelans flee the country and those who remain struggle to find basic goods like food and antibiotics, the embattled president claims the relief effort led by Mr. Guaido is a U.S. orchestrated ploy to oust him from power. 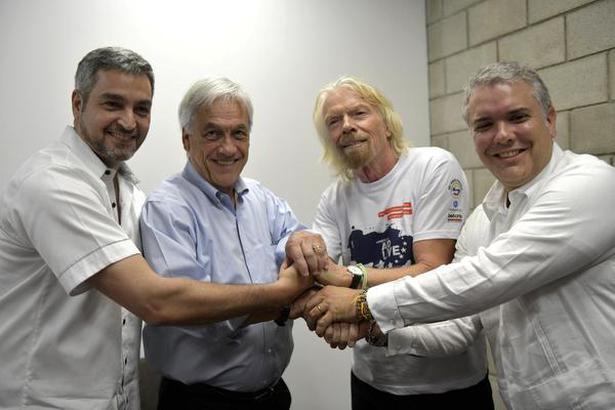 It’s not clear how Mr. Guaido sneaked into Colombia in one video circulating on social media he appears running across a bridge near the Colombian town of Puerto Santander, while in another he could be seen boarding a helicopter belonging to the Colombian air force.

But once he arrived at the giant stage located next to the Tienditas bridge connecting the two countries he was greeted like a rock star himself. Thousands of Venezuelans shouted “Juan arrived! Juan arrived!” when they spotted him donning a white shirt and accompanied by a large contingent of Colombian security as he made himself through the front of the crowd.

The presidents of Colombia, Chile and Paraguay were on hand to be the first foreign heads of state to embrace the 35-year-old lawmaker since he declared himself interim president a month ago at an outdoor rally.

The optimistic mood at the Live Aid-style concert opened in the Colombian border city of Cucuta couldn’t mask underlying tensions a day before Maduro’s opponents embark on a risky strategy to undermine Maduro and bring in the aid being amassed along three of Venezuela’s borders. But the crowd reacted with joy when Guaido suddenly appeared.

Thousands of kilometers away, near a crossing with Brazil, a member of an indigenous tribe was killed and 22 more injured in clashes with security forces who enforced Maduro’s orders to keep out the aid.

“This concert happens once in a lifetime,” 19-year-old Shirley Duran said. “It will be a great opportunity for so many poor people who are suffering under the heat, who are hungry, jobless. At last they’ll have something to enjoy.”

British billionaire Richard Branson organized the “Live Aid Venezuela” concert, which featured dozens of Latin musicians performing on a bridge-side stage not far from where Maduro’s government has placed a giant shipping container and tanker to prevent the delivery of U.S.-supplied food and medical kits.

As Venezuela’s political turmoil drags on, allies of Mr. Guaido, who the U.S. and dozens of other countries have recognized as Venezuela’s rightful leader, are hoping the massive concert in Cucuta will set the stage for the smooth delivery Saturday of the aid and a turning point in their quest for a transitional government. The promised “humanitarian avalanche” is taking place exactly a month after Mr. Guaido declared himself interim president in an outdoor rally. 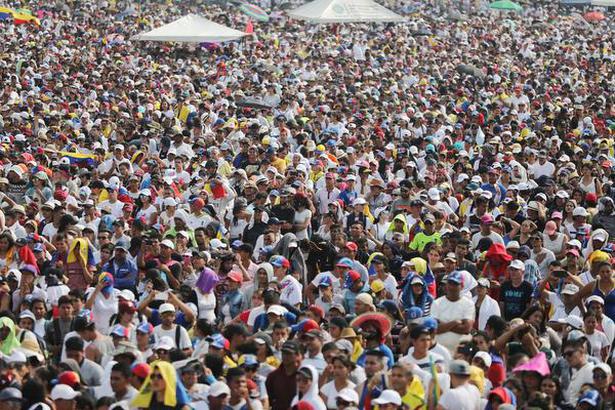 After the concert, Venezuela’s Vice President Delcy Rodriguez said her government was ordering the partial closure of the border with Colombia hours ahead of the planned delivery of the humanitarian aid.

Ms. Rodriguez said on Twitter that the government was temporarily closing three crossings in Tachira state because of the “serious and illegal threats” against Venezuela’s peace and sovereignty coming from Colombia’s government.

At the concert venue, the feeling was one of collective catharsis, especially for migrants who in recent years have fled Venezuela’s economic implosion by crossing into Colombia. Under a scorching sun, those in attendance waved Venezuelan flags, squirted water at each other and swayed to music by marquee artists including Colombia’s Carlos Vives and Mexican rock band Mana as well as a host of Venezuelan performers.

Reymar Perdomo, a Venezuelan street singer who rose to fame for a video went viral showing her singing on buses in Peru, kicked off the concert with her signature song, “Me Fui,” Spanish for “I left,” which has become the unofficial anthem of the mass exodus.

Perdomo said performing so close to the border brought back painful memories.

“A little over a year ago I crossed this border and was robbed of my luggage and all my money,” she said. “But I know in this moment that there will be change because Venezuelans want it and they are showing it today.”

The plan to bring in aid is the most ambitious and potentially dangerous that the opposition has attempted to undertake since Guaido decided to challenge Maduro’s rule.

But the embattled socialist has shown no signs of backing down, and analysts warn that whatever happens over the next two days may not yield a conclusive victory for either side.

As if to highlight those risks, a woman from the combative Pemon tribe identified as Zoraida Rodriguez died from bullet wounds in clashes near the border with Brazil. Hours later, members of the Pemon tribe retaliated by taking control of the local airport, gateway to the world-famous Angel Falls. Security forces fired tear gas and rubber bullets to disperse the demonstrators.

There was no immediate information on the condition of the injured, though local authorities said six people had to be rushed to a hospital across border because local clinics lacked medical supplies.

Much like the original 1985 Live Aid concert, which raised funds to relieve the Ethiopian famine, Branson has set a goal to raise $100 million for Venezuelans in need within 60 days. He said he got the idea after brainstorming with Guaido and his political mentor, Leopoldo Lopez, who is under house arrest for leading protests against Maduro in 2014.

“If we can take people to space why is it so hard to take people out of poverty?” said Mr. Branson, who skipped a test flight over California into space by his Virgin Galactic’s rocket plane in order to attend Friday’s concert. “We must break the impasse and end the humanitarian crisis.”

Days after Mr. Branson launched his concert, Maduro’s government announced that not only would they hold a rival festival but that they would also deliver over 20,000 boxes of food for poor Colombians on Friday and Saturday.

In contrast to the festive spirit in Cucuta, most of the acts at the pro-government show were lesser known, the crowd of a few hundred much older and some attendees reported being bussed in by the government from as far away as the capital, Caracas.

“We’re facing a situation of possible aggression by the North American empire,” said Jose Saavedra, a 61-year-old lawyer attending the concert. “We can’t allow them to come here and impose conditions and a president on us. The president is elected by the Venezuelan people following the constitution.”

While the pro-Maduro conference was being broadcast on state TV, people inside Venezuela had trouble tuning into the fundraising concert. Internet watchdog group Netblocks said YouTube, Bing and Google services inside Venezuela went down for nearly an hour on state-run internet provide CanTV. On widely used DirecTV the plug was also pulled on two foreign networks that carried the concert live.

After the concert concluded, Guaido spoke alongside Duque and Pinera at the warehouse where the aid is being stockpiled. He said he was able to circumvent Maduro’s travel ban only with the help of the Venezuelan armed forces, whose loyalty to Maduro has so far been impossible to break and will once again be tested Saturday.

“Here is a Venezuela in search of freedom,” Mr. Guaido said. “Thank you, to the people of the world for opening your doors to us.”