The IAF has floated a tender for 114 fighter jets, while a proposed fifth generation stealth fighter, the Advanced Medium Combat Aircraft (AMCA), is on the drawing board.

As the Indian Air Force (IAF) continues its efforts to procure new fighter jets, the U.K. has made a pitch for cooperation in the fields of building aircraft carriers and future fighter aircraft technologies.

“It is not a selling proposition. It is a partnership building exercise on how India and the U.K. can collaborate as future defence technologies are increasingly going to be delivered by collaborative programmes,” British High Commissioner in India Dominic Asquith said at Aero India 2019 held from February 20 to 24. 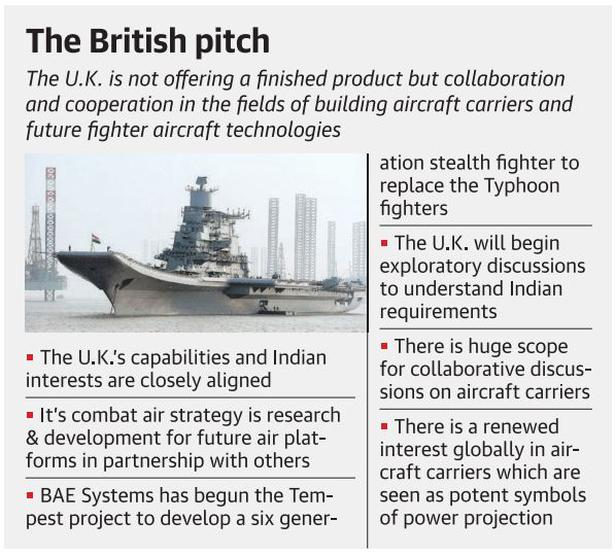 The IAF has floated a tender for 114 fighter jets, while a proposed fifth generation stealth fighter, the Advanced Medium Combat Aircraft (AMCA), is on the drawing board.

Sir Dominic said that on the naval side, they were looking at collaboration in aircraft carriers “where our capabilities and Indian interests are very closely aligned”.

Talking of the U.K.’s air combat strategy, he said it was essentially the “research and development of technologies for future air platforms which we would like to do in partnership with others”.

As part of the air combat strategy, BAE Systems has begun the Tempest project to develop sixth generation stealth fighters to replace the Typhoons in service with the Royal Air Force and are scheduled to be phased out by 2040.

Savraj Sidhu, a member of the Future air combat team of the UK Ministry of Defence, said the project is now at the concept stage and they still do not know what it will look like or who the partners are.

Preliminary discussions are also on with Sweden, and Japan in addition to other allies.

“We are going to have exploratory discussions to understand what the Indian requirements are for future air combat and whether they align with the U.K. and hopefully start a long detailed discussion after Aero India,” he said.

The Tempest project is jointly led by the U.K. government, BAE Systems, Rolls Royce, Leonardo and MBDA. Andrew Pulford, senior military adviser to the BAE, told  that Team Tempest is about to deliver a technology demonstrator and it is likely to be done by 2035.

Talking of carrier cooperation, Air Marshal Stuart Evans of the Royal Air Force and Deputy Air Commander, Allied Air Command said that comparing the nature of the two carrier programmes and some of the others globally, the Indian and UK are the most similar in terms of requirement, size and capability.

“There is huge scope for collaborative discussions on whether there could be more synergy between these two programmes.”