Pakistan also claims to have shot down two IAF aircraft and arrested one Indian pilot.

Meanwhile, External Affairs Minister Sushma Swaraj has briefed China on the Balakot air strike, reiterating that New Delhi is averse to any escalation of tensions with Islamabad.

Civilian airspace and airports north of Uttar Pradesh’s Saharanpur have been after IAF instructions at around 10.30am.

Pakistan has also closed its airspace for all airlines, according to sources at the airport.

International flights exiting Indian airspace north of Mumbai are being re-routed through the Middle East.

Home Minister Rajnath Singh is reviewing the security situation in the country, especially along the border with Pakistan, officials have said.

During the meeting, attended by National Security Advisor Ajit Doval among others, a detailed presentation was given about the security situation in the country and steps taken to ensure peace in all sensitive places.

Mr. Singh directed the officials to ensure the Border Security Force, which guards the India-Pakistan border continues to remain on highest level of alertness so that any misadventure from across the border could be foiled, a home ministry official said.

Srinagar, Jammu and Leh airports were among five airports closed on Wednesday for civilian air traffic shortly after an IAF jet crashed in Kashmir’s Budgam district, PTI has reported.

The move to close the five airports comes amid escalation of tension between India and Pakistan after IAF carried out strikes on terror bases in Pakistan.

Airports at Chandigarh and Amritsar were among those closed, according to airline officials.

In Srinagar, an official of the Airports Authority of India told PTI, “The civilian air traffic has been suspended temporarily in view of the emergency“.

At Delhi airport, flights to Jammu Airport are showing delayed as Srinagar airspace has been closed temporarily, reports our correspondent Sandeep Phukan. 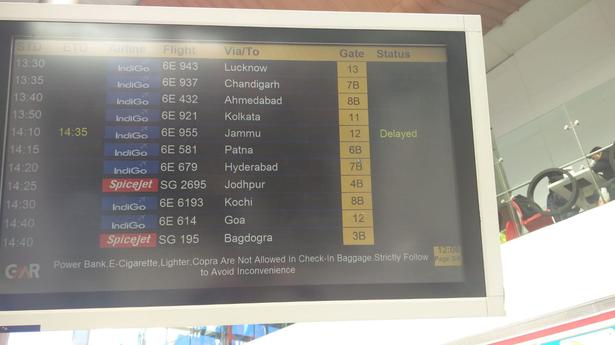 The decision to call the NCA meeting was taken on Tuesday in the meeting of National Security Committee – a civil-military top level body that discussed the situation after the Balakot air strike.

Maj. Gen. Asif Ghafoor, spokesperson of the Pakistan Armed Forces claims the Pakistan Air Force has shot down two Indian aircraft and one Indian pilot has been arrested. “In response to PAF strikes this morning as released by MoFA, IAF crossed LOC. PAF shot down two Indian aircrafts inside Pakistani airspace. One of the aircraft fell inside AJ&K while other fell inside IOK. One Indian pilot arrested by troops on ground while two in the area,” he tweets.

Pakistan has issued a statement regarding the violation of Indian air space.

Today, Pakistan Air Force undertook strikes across Line of Control from within Pakistani airspace. This was not a retaliation to continued Indian belligerence. Pakistan has therefore, taken strikes at non military target, avoiding human loss and collateral damage. Sole purpose being to demonstrate our right, will and capability for self defence.

We have no intention of escalation, but are fully prepared to do so if forced into that paradigm. That is why we undertook the action with clear warning and in broad daylight.

For the last few years, India has been trying to establish what they call “a new normal” a thinly veiled term for doing acts of aggression at whatever pretext they wish on a given day. If India is striking at so called terrorist backers without a shred of evidence, we also retain reciprocal rights to retaliate against elements that enjoy Indian patronage while carrying out acts of terror in Pakistan. We do not wish to go to that route and wish that India gives peace a chance and to resolve issues like a mature democratic nation.

Pakistani fighter jets on Wednesday violated Indian air space in Jammu and Kashmir’s Poonch and Nowshera sectors but were pushed back by Indian aircraft, PTI reported senior officials as saying.

There were no immediate reports of any casualties or damage.

They were immediately pushed back by Indian jets on air patrol.

According to the police, the fighter jet crashed at Budgam’s Garend Kalan in an open field, just seven km away from the Budgam town, around 10:40 a.m. Budgam is adjacent to Srinagar. “We heard two loud sounds,” said locals.

External Affairs Minister Sushma Swaraj on Wednesday blamed Pakistan’s inaction against Jaish-e-Mohammad (JeM) — the international terror group responsible for the Pulwama attack — for triggering the strike by the Indian Air Force (IAF) across the Line of Control, and reiterated that New Delhi was averse to any escalation of tensions with Islamabad.

“In the light of continued refusal of Pakistan to acknowledge and act against terror groups on its territory and based on credible information that JeM is planning other attacks in various parts of India, the Government of India has decided to take pre-emptive action. The target was selected in order to avoid civilian casualties,” Ms. Swaraj said at the plenary foreign ministerial meeting of the Russia-India-China grouping.

U.S. Secretary of State Mike Pompeo on Tuesday said he spoke to Pakistan Foreign Minister Shah Mehmood Qureshi on the topic of taking “meaningful action” against terrorist groups operating on Pakistan soil, following an air strike by India inside Pakistan.

“I spoke to Pakistani Foreign Minister Qureshi to underscore the priority of de-escalating current tensions by avoiding military action, and the urgency of Pakistan taking meaningful action against terrorist groups operating on its soil,” said Mr. Pompeo in a statment.