His unbeaten 113 came off just 55 deliveries; Kohli and Dhoni’s century stand to no avail

An extraordinary hundred from Glenn Maxwell powered Australia to a seven-wicket victory over India and a first T20 series win in the country.

Set a target of 191 in the second T20I at the M. Chinnaswamy Stadium on Wednesday, Australia rode on Maxwell’s unbeaten 113 (55b, 7×4, 9×6) to sail home by seven wickets, with two balls to spare. The Victoria batsman has not always been treated fairly by Australia’s selectors but this assault — studded with some of the cleanest hits over the fence — was a demonstration of why he cannot be ignored for the World Cup.

India struck early in the run chase, reducing Australia to 11 for two, but D’Arcy Short and Maxwell dragged their side back into the contest, adding 73 runs off 43 balls for the third wicket. The home team replaced Mayank Markande and Umesh Yadav with Vijay Shankar and Siddharth Kaul, but it did not change the fact that there were only five bowlers at Virat Kohli’s disposal.

If one of his key personnel had a bad day, the captain would have no one else to turn to. As it turned out, Yuzvendra Chahal had a rough evening, finishing with none for 47 from his four overs, and there were no alternatives. Short and Maxwell scored effortlessly through the middle overs, before the former was dismissed by Vijay Shankar for 40 (28b). 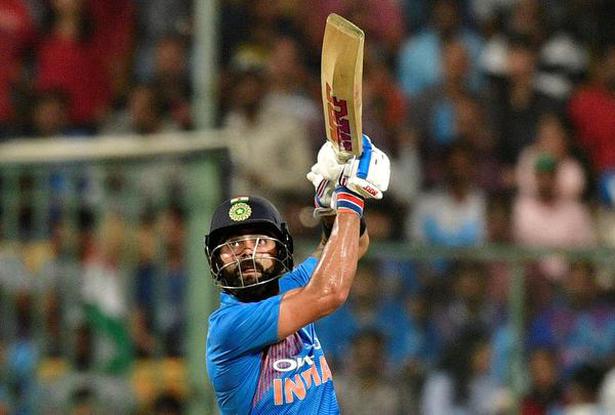 Up, up and away! Virat Kohli was in his element, making a stroke-filled 72 with six sixes.   | Photo Credit: K. Murali Kumar

Maxwell, though, would not be stopped. With Peter Handscomb playing the perfect foil, he went on the attack. Australia needed 60 off the final five overs, when Maxwell slammed successive sixes off Chahal — the first over fine-leg, the second reverse-swept over third man — as the leg-spinner bled 16 runs. Jasprit Bumrah and Kaul had 44 to defend off the final four overs, but with Maxwell in such form, there was little they could do.

At the heart of the Indian innings was a rapid 100-run partnership (50 balls) for the fourth wicket between Kohli and M.S. Dhoni. The pair was united at the crease just as Australia had begun applying the brakes in the middle overs; soon the fielding side would be scrambling for cover.

K.L. Rahul had given his side a brisk start with a 26-ball-47, after India had been sent in, but the Karnataka batsman’s dismissal stemmed the flow of runs. Shikhar Dhawan, who replaced Rohit Sharma in the side, was out for 14, held by Marcus Stoinis as he ran in from the cover boundary; the catch was referred to the third umpire but the fielder was deemed to have got his fingers under the ball.

There were no such doubts about Rishabh Pant’s dismissal, though. Frustrated by three dot balls, the Delhi batsman swiped at the next delivery, only to be caught by a diving Jhye Richardson, who had hared to his left from long-off. India had lost three for 13 in 23 balls.

Dhoni’s laboured effort in Visakhapatnam may have sparked some questions over his place in this Indian T20 side, but he demonstrated here that he could still make an impact in the shortest format. Dhoni was severe on Short’s part-time left-arm spin, launching him twice into the second-tier on the leg-side, en route to his 40 (23b).

Kohli had observed at the toss that this pitch looked like the ‘Bangalore wicket of old’, full of runs. He batted with great fluency, hitting through the line, trusting the bounce, and being violent on anything remotely loose.

Kohli played some stunning shots, including a hat-trick of sixes off Nathan Coulter-Nile: the first sent over deep mid-wicket with a flick of the wrists, the second driven beyond extra-cover, and the third again whipped over the leg-side boundary. He remained unbeaten on 72 (38b).

India had smashed 116 runs off the last nine overs, including 91 off the last six, but it would not be enough.

Australia won by seven wickets with two balls to spare and clinched series 2-0.

Team India has an enviable ODI record to protect