U.S. President Donald Trump has announced that he intends to end preferential trade terms for India under the Generalized System of Preferences (GSP) programme. His intent was conveyed in a letter sent to the Speaker of the House of Representatives and the President of the Senate.

The GSP programme, which sets zero tariffs for certain goods from a set of 121 developing countries to foster their trade and economic development, accounts for some $5.6 billion of India’s exports to the U.S., making India the largest GSP beneficiary. Chemicals, gems and jewellery, engineering and textiles are among the Indian industrial sectors that benefit from the GSP.

“I am taking this step because, after intensive engagement between the United States and the Government of India, I have determined that India has not assured the United States that it will provide equitable and reasonable access to the markets of India…,” Mr. Trump’s letter, which was shared with reporters, said.

The United States Trade Representative (USTR) had said in October 2017 that it would review GSP eligibility based on the eligibility criteria, starting with a review of Asian and Pacific Island countries. A review of India’s eligibility was launched last April.

“India has implemented a wide array of trade barriers that create serious negative effects on United States commerce. Despite intensive engagement, India has failed to take the necessary steps to meet the GSP criterion,” the USTR said on its website.

One of the discretionary criteria the President must (as per the GSP statute) take into account while determining GSP eligibility is whether the beneficiary “will provide equitable and reasonable access to its markets and basic commodity resources and the extent to which it has assured the United States it will refrain from engaging in unreasonable export practices.” 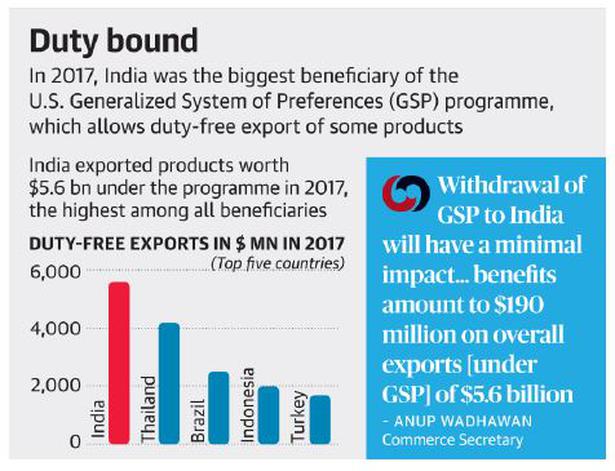 India’s new e-commerce rules — which have impacted American companies like Amazon and Walmart (majority owner of Flipkart), price controls on medical devices (cardiac stents), tariffs on ICT products like smart watches and high-end mobile phones and lack of greater market access for the U.S. dairy industry are among the issues that have caused trade friction between the two countries.

Mr Trump has repeatedly taken shots at India’s tariffs, which he views as unreasonable. He called India “tariff king” last October and as recently as last weekend, complained about Indian tariffs on Harley Davidson motorcycles, a long-standing pet-peeve of the U.S. President .

India and the U.S. have been in focused trade talks since Washington imposed tariffs on steel and aluminium early last year, ostensibly on grounds of national security. India had made a list of products for retaliatory tariffs but has withheld taxing these, given ongoing negotiations.

In diplomatic messaging in the U.S., Indian officials have been quick to bring up the declining trade surplus (over just over $21 billion) that India has with the U.S. Mr. Trump is known to look at bilateral trade balances the U.S. has with other countries as a proxy for the “fairness” of trade with those countries.

Oil is one of the new measures to increase India’s purchase of U.S. goods. Last month Indian Oil Corporation announced a $1.5 billion deal to purchase oil from the U.S. until March 2020. India had imported over $3 billion in U.S. oil in 2018, Indian government sources had told Business Line in December.

A mandatory 60 days must now pass after the notice has been given to the beneficiary countries and to Congress during which time there is, at least technically, the possibility of negotiation. After the 60 day notice period, a beneficiary country can be taken off of the GSP list by Presidential proclamation.

Notably, Mr. Trump’s letter to the two Congressional leaders also says, ‘I will continue to assess whether the Government of India is providing equitable and reasonable access to its markets, in accordance with the GSP eligibility criteria.”

It is not likely though that it will be re-negotiation of India’s place under the system, a source familiar with the process told .

Reversals are however possible, including over the longer term. Argentina, which lost GSP benefits under the Obama administration in 2012 for failing to pay arbitration awards in two disputes involving U.S. investors, saw them being reinstated by Presidential proclamation — but not for all product categories — effective January 2018.

A separate letter was sent to Congressional leaders by Mr. Trump saying he intended to withdraw Turkey from the list of GSP beneficiaries. However, the reasons were different: Mr. Trump said Turkey was no longer at a level of economic development that warranted preferential treatment. “ In particular, in the four and a half decades since Turkey’s designation as a GSP beneficiary developing country, Turkey’s economy has grown and diversified,” the letter said.