Tamils demand answers on ‘missing’ relatives ahead of UNHRC session

According to sources in the northern districts, most schools, shops and business establishments were shut, in an act of solidarity with the relatives of missing persons, some of whom have been agitating continuously for two years now in Kilinochchi district. 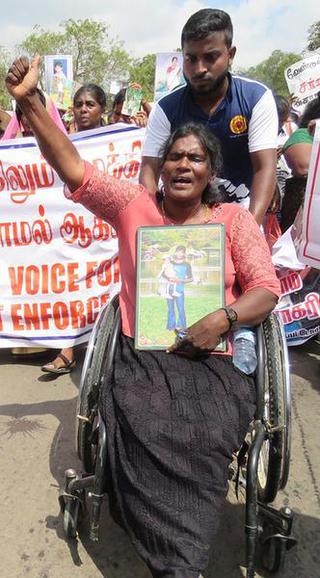 The University of Jaffna was also closed, and public transport services came to a halt. Thousands took to the streets, holding placards with messages such as “Where is my son?”, “UN, do not give additional time for Sri Lanka for war crime investigations”, and photographs of their missing relatives. Almost all political parties representing northern Tamils and Muslims extended their support to the rally, local media reports said. The hartal comes just as the 40th session of the UN Human Rights Council begins in Geneva, where a core group of countries, including the U.K., Canada and Germany, will likely put forth a new resolution on promoting reconciliation, accountability and human rights in Sri Lanka. The move is expected to give Sri Lanka more time to fulfil its earlier assurances to the Council.

“We met President Sirisena in Jaffna in June 2017 and handed over a petition asking for information on those who surrendered to the Army. He promised to ask authorities to release the list of persons who surrendered. Till date, we have not received it. How can we continue to have faith in this government?” asked Yogarasa Kanakaranjani, who leads an organisation representing families of disappeared persons in the north and east. 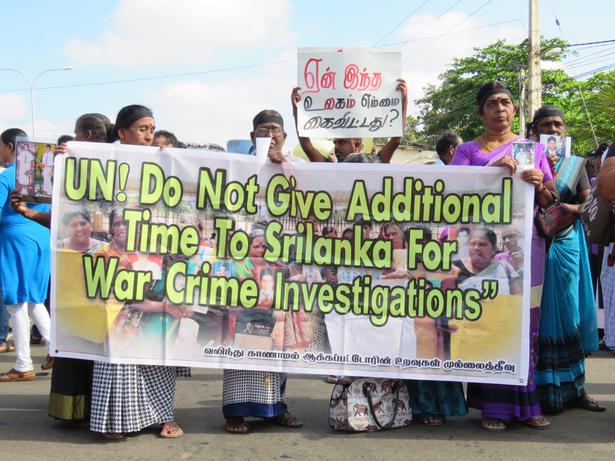 A protester in the Northern Province.   | Photo Credit: Tamil Mirror

“The international community must not give Sri Lanka more time. They must intervene.”

Enforced disappearances has remained one of the most challenging and sensitive issues for the Tamil people since the war ended in 2009. Amnesty International has estimated that at least 60,000 persons have gone missing in the past decades.

Following its commitment to the international community, the government set up the Office on Missing Persons (OMP) in 2016, which held wide consultations with families, but campaigners remain sceptical of its ability to bring justice.

In September last year, the OMP submitted an interim report to the government with a series of measures for immediate action – ranging from providing financial aid to families and debt relief to expediting prosecutions. While the government reportedly held initial discussions on possible relief, there has been little action in the five months since.

According to human rights activist Ruki Fernando, the demand that the UN not give Sri Lanka an extension has stemmed from people’s disappointment over the government’s failure to give them convincing answers in the last three-and-a-half years.