The Employee Stock Option Plan (ESOP) is perhaps one of the best methods of rewarding an employee for his/her contribution to the company, considering that it is a win-win for both the employee and the employer.

ESOP refers to an option given to employees, and gives them the right to purchase the shares of the company at a future date (on expiry of vesting period) at a pre-determined price. At the end of the vesting (lock-in) period, the employee can opt to purchase the shares, which is referred to as exercising the ESOP.

By doing so, an employee gets to participate in the profits of the company upon paying a concessional price, which is the exercise price. At the same time, the company is also assured of their interests being aligned towards organisational goals, by giving them a share of the pie. If you have recently been granted an ESOP by your employer and are evaluating whether or not to exercise the same, a look at the tax rules governing these will help.

The first instance of taxation of ESOPs is at the time of exercising the option. The employee will have to add the value of shares allotted under the ESOP to his income from salaries, in the year of exercising the same.

The value of shares to be treated as a perquisite for tax purposes will essentially be the difference in fair market value (FMV) and the amount actually paid by the employee. For listed companies, the FMV shall be the average of the opening and closing prices on the date of exercising the options.

In instances where the shares are listed on multiple exchanges, the price on the exchange that records the highest volume of trading shall be considered.

Let us take an example, where Mr. X has exercised his ESOP on November 1. He was allotted 1,000 shares of ABC company, by paying ₹100 for each share. On that day, the opening and closing prices of ABC’s shares were at ₹101 and ₹105, respectively — average comes to ₹103. 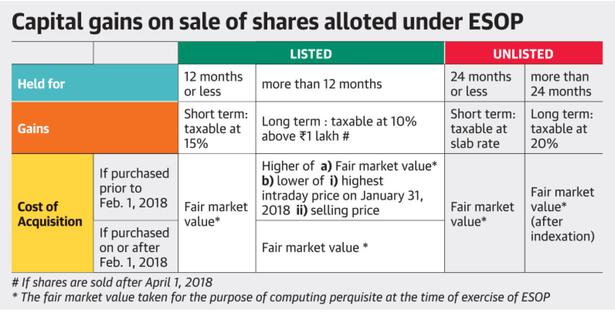 Another point of taxation for an ESOP is when the shares thus acquired are sold. The difference between the consideration received on sale and the cost of acquisition of such shares, shall then be subject to tax as capital gains. Depending upon the period of holding the shares, the gains shall be taxed as long-term or short-term.

For listed shares, if the shares are held for 12 months or less, then the capital gains shall be taxed as short term and a rate of 15% shall apply.

When the period of holding exceeds 12 months, then the resultant long-term capital gains (LTCG) shall be taxed at 10%, if the gains exceed ₹1 lakh. That said, for listed equity shares sold prior to April 1, 2018, LTCG was exempt.

Generally, cost of acquisition for shares allotted under ESOP shall be the FMV which has been considered for the purposes of computing perquisite as mentioned above. In the example above, on sale of those shares, the cost of acquisition for Mr. X would be ₹103 per share. A noteworthy point here would be that, if the shares were acquired before February 1, 2018, then the computation of cost of acquisition for LTCG, shall be calculated differently. This is because the Finance Act, 2018, had grandfathered the payment of LTCG tax on gains accrued till January 31, 2018.

In the case of unlisted shares, short term capital gains (STCG) — taxed at the respective slab rates applicable to an individual — shall apply on the sale, if the period of holding is 24 months or less. In the event of sale of unlisted shares resulting in a LTCG, the rate of tax shall be 20% with indexation benefit.

Companies have come up with a variant of ESOPs — Restricted Stock Unit (RSU). The RSUs are shares in the company given to an employee every time some specific performance targets or employment conditions are met. The employees get the RSUs without any payments. IT major Infosys recently granted RSUs to about 6,500 mid-level employees.

Interestingly, for taxation, an RSU is treated exactly like an ESOP. Hence shares allotted under RSUs — free of cost — may cost a ‘bomb’ in taxes paid. This is because the entire FMV of the shares will be subject to tax as a perquisite.