The death toll of CRPF jawans in the February 14 terror attack in Pulwama in Jammu and Kashmir has crossed 40.

After a meeting of the Cabinet Committee on Security chaired by Prime Minister Narendra Modi, the withdrawal of the Most Favoured Nation status granted to Pakistan was announced. The Ministry of External Affairs (MEA) summoned Pakistan High Commissioner Sohail Mahmood and issued a “strong démarche” in connection with the attack.

Several nations, including the United States, and the United Nations have strongly condemned the attack.

Jammu and Kashmir Police have detained seven persons from Pulwama district of South Kashmir in connection with the terror attack, officials say.

The youths were detained from Pulwama and Awantipora during the night on suspicion of links with the planning of the suicide attack.

The overall planning is believed to be done by a Pakistani national, one Kamran of Jaish-e-Mohammed, who has been operating and moving in areas — Pulwama, Awantipora and Tral areas of South Kashmir.

The fidayeen (suicide attacker) was identified as Adil Ahmad from Kakapora in Pulwama. He had joined the JeM in 2018.

According to initial investigations, the planning for the terror strike was done at Midoora area of Tral in South Kashmir.

Police are also looking for another local JeM overground worker who was instrumental in arranging the explosive material. – PTI

“An NIA team, along with the explosives and forensic experts, has collected material required for forensic evaluation from the scene of crime at Pulwama. Considering the status of the scene of crime, the team would continue with sifting of the material on February 15 as well. The outcome would be made known after the analysis is over,” says NIA official.

Portraits of CRPF Jawans killed in the Pulwama attack 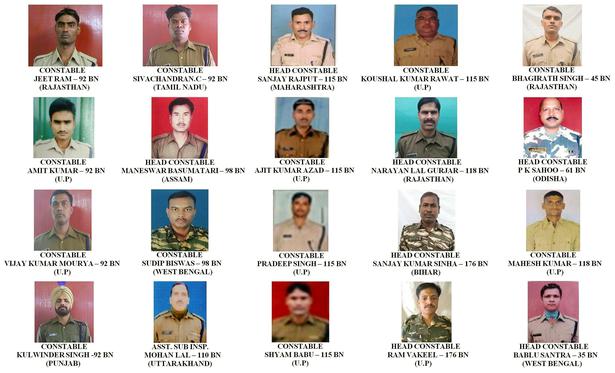 Prime Minister Narendra Modi and Congress president Rahul Gandhi have paid their tributes to the slain CRPF jawans at the Palam airport in Delhi.

Both leaders paid their homage to the slain security personnel by laying a wreath where the caskets carrying the mortal remains of the soldiers were kept at the Palam technical area.

The Congress chief paid his tributes after the three armed forces chiefs’ homage to them.

Shiv Sena chief Uddhav Thackeray says the terror attack had shown that it is now time to “strike inside Pakistan“.

“If an intelligence failure led to the terrorist attack on the CRPF convoy in Jammu and Kashmir, those who were in charge should be removed,” he said.

After the surgical strikes of 2016, it is now time to “strike inside Pakistan”, he tells reporters in Mumbai. “The issues of alliances, elections will be there. But Pakistan must not be allowed to go scot-free. It should be taught a befitting lesson,” he says.

“You [the Union government] conducted a surgical strike in Pakistan occupied Kashmir. Now the time has come to strike inside Pakistan. The entire country supports the government on this issue,” he says.

“This is not just a terror attack. It has blown the country’s intelligence system into smithereens,” he notes and demands action against those who failed to take necessary steps to prevent such incidents in spite of being in charge.

“Instead of making tall claims, Pakistan needs to be taught a lesson once and for all. If intelligence inputs were not available, one wonders what do the people who are holding the reins were doing. They should be removed,” the Sena chief says.

Kerala govt moving SC against CAA: No explanation can satisfy me, says Governor after meeting with Chief Secretary