The daughter of a Pakistani man who was killed in the Samjhauta Express bombing in 2007 has written to the National Investigation Agency requesting the agency to not oppose her plea to appear as a witness before a special NIA court in Panchkula, Haryana.

Her counsel Momin Malik said the woman, Rahila Wakil, did not get any help from either India or Pakistan to depose before the court.

The trial in the case has concluded and the court was to deliver a verdict on March 11 when Ms. Wakil sent an email to the court that she wanted to record her statement as a witness.

The court asked the NIA to submit its response on March 14 on the plea made by Ms. Wakil. The NIA had earlier said that in the past two years it had served four notices to Pakistan to present the 13 witnesses in the case but got no response from the neighbouring country.

Former Rashtriya Swayamsevak Sangh (RSS) member Aseemanand is the prime accused in the case. A powerful explosion took place in two coaches of the Samjhauta Express on February 18, 2007, killing 68 people, mostly Pakistanis. The train was on the way to Lahore from Delhi. 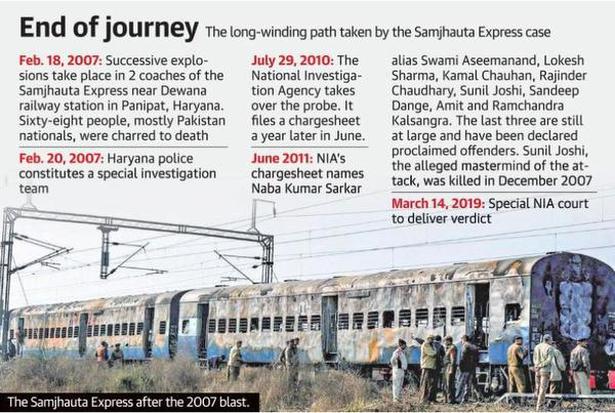 On the day of the blast, after he boarded the train at the Old Delhi railway station, Muhammad Wakil spoke to his daughter on phone and mentioned about “some suspicious persons,” Mr. Malik said. Hours later when the train reached Panipat, the explosion occurred. Mr. Malik said that the new revelations would be submitted before the court on Thursday as the Pakistani witnesses never got a chance to depose.

“Since they migrated to Pakistan in 1947, their families are treated as mohajirs (refugees) in Pakistan. The family visits India as they still have relatives here. I sent over 40 letters to the Pakistani High Commission on Ms. Wakil’s behalf but never got a response. When she approached the Indian High Commission in Islamabad for a visa, she was asked to contact Delhi,” Mr. Malik, the counsel said.

In letter written to the NIA on Wednesday, Ms. Wakil requested the agency to provide “no objection” on the application under Section 311 Cr.Pc in the “interest of justice, equity and fair play for the fair and true decision of this case on humanitarian grounds.”

Mr. Momin said the Pakistani establishment did not help the family in getting their statement recorded in a court here.

The Samjhauta case was transferred to the NIA in 2010. Aseemanand was first arrested by the Central Bureau of Investigation (CBI) in the Mecca Masjid case in 2010.

While in custody, Assemanand confessed to his role in the Samjhauta blast. In the past two years, he was acquitted in the Mecca Masjid blast and the Ajmer Dargah blast cases. The NIA did not challenge the acquittals. He is currently out on bail in the Samjhauta case.