The number of net jobs created in the Micro, Small and Medium Enterprises (MSME) sector in the last four years stood at just 3,32,394, which is 13.9% higher than the base four years ago, according to a CII survey of more than one lakh companies.

The findings for the four-year period — beginning 2015-16 — pale in comparison with that from the government’s Ministry of Micro, Small & Medium Enterprises for an earlier period, which shows 11,54,293 MSME jobs were created in the three years ended 2014-15.

Most in micro sector

It also shows that 73% of the jobs were created by micro enterprises.

“Out of the survey sample, 70,941 firms were responsible for this increase. On the whole, nearly two-thirds of the respondents witnessed an increase in hiring activity over the last four years, while 17% witnessed no change.” 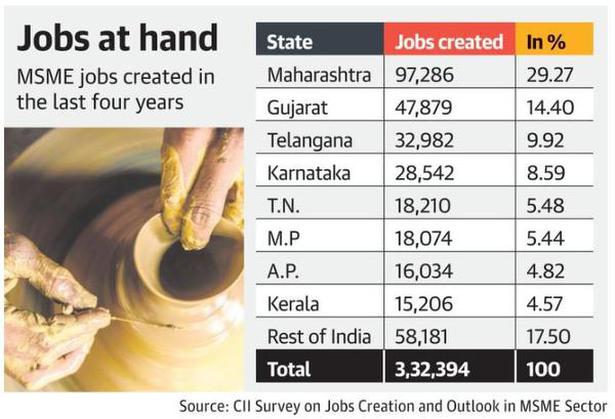 Looking at the sectoral break-up, the hospitality & tourism sector accounted for 12% of the jobs, while the textiles & apparels and metal products sectors each contributed about 8% to job creation.

“The other large job generators were machinery parts (7%) and transport & logistics (7%),” the report said. “The top five sectors accounted for over 40% of the jobs, indicating a degree of sectoral concentration.”

“The concentration in terms of geographic dispersion of jobs created was also noticeable, with three States — Maharashtra (29%), Gujarat (14%) and Telangana (10%) — accounting for 54% of the jobs created in the last four years,” the report said.

“The top eight States accounted for over 80% of the jobs.” The survey also found that 5,70,804 jobs are expected to be created over the next one year, which represents a 21% increase over the current employment base. The trend seen in the last four years in terms of sectoral break-up will remain largely the same, the report added.