Defence forces are on high alert, educational institutions ordered shut and over 8 lakh people in coastal districts are being evacuated as Odisha braces for cyclone ‘Fani’, the extremely severe cyclonic storm likely to make landfall near Puri on Friday, officials said.

It is expected to cross the holy town of Puri in the afternoon of May 3, packing winds up to 175 kmph before landfall.

‘Fani’ has also kept Andhra Pradesh officials on edge as it is expected to move close to Srikakulam, Vizianagaram and Visakhapatnam districts

In view of the severe cyclonic storm ‘Fani’ closing in on Odisha, the Ocean State Forecast Operations Centre in Hyderabad on Wednesday issued warnings of high waves to fishermen along Odisha, West Bengal and Srikakulam, Vizianagaram and Visakhapatnam districts of Andhra Pradesh, according to Balakrishnan Nair, Head, Ocean Information and Forecast Services Group (ISG).

An upward trend in higher waves along the coastline has started registering at Visakhapatnam and Gopalpur. 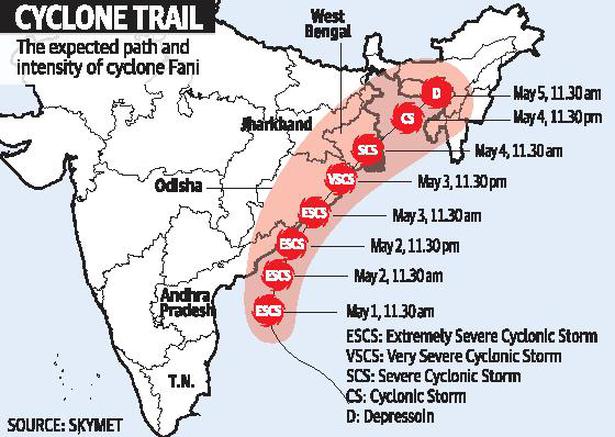 “Higher waves are likely to be experienced along the north Andhra Pradesh coast, Odisha and West Bengal coasts with maximum waves being along the Odisha coast. At Visakhapatnam, maximum wave height of around 5.8 mts is likely during the early hours on May 2; at Gopalpur, around 8.7 mts, early afternoon of May 3 and at Digha around 5.4 mts, early morning of May 4. This is for locations where Wave Rider Buoys have been deployed,” he said.

The system is likely to move northwestwards during the next 12 hours and recurve north-northeastwards and cross Odisha coast between Gopalpur and Chandbali, to the south of Puri around 3rd May afternoon with maximum sustained wind of speed 175-185 kmph gusting to 205 kmph.

The observations and forecast model outputs are in good agreement in the open ocean and near-shore.

This suggests maximum caution to be exercised by Odisha, Andhra Pradesh and West Bengal coasts, he maintained.

Meanwhile, during a video conference on the cyclone preparedness in Andhra Pradesh, Odisha and West Bengal, Andhra Pradesh Chief Secretary L.V. Subrahmanyam told Union Cabinet Secretary P.K. Sinha that Collectors were alerted and special officers were deployed in all mandals in Srikakulam, Vizianagaram and Visakhapatnam districts.

He said the impact of ‘Fani’ could be significant on 200 villages and precautionary measures were taken while the cyclone was being tracked by Doppler radars in Chennai, Visakhapatnam and Machilipatnam.

The Odisha government on Wednesday took all possible measures to face ‘Fani’, which is likely to hit the State’s coast in Puri district on Friday evening.

Stating that every life is precious, Odisha Chief Minister Naveen Patnaik, who reviewed the cyclone preparedness at a high-level meeting at the State Secretariat, directed the administration to ensure 100% evacuation in the vulnerable areas.