From growing up in a palace to becoming a performer, Rama Varma, who recently turned 50, traces his journey as a classical musician

He is arguably the foremost disciple of the legendary vocalist-composer Mangalampalli Balamuralikrishna. Ashwathi Thirunal Rama Varma, the vocalist and vainika and a descendant of Swati Tirunal, the Maharaja of Travancore, is destiny’s child. Breaking Barriers, Building Bonds, the title, which reads like the opening lines of a socio-political treatise, may not be really off the mark. This collection of essays and reminiscences to commemorate his 50th birthday pays tribute to the universal spirit that pervades Rama Varma’s personality and music — in the mould of Maharaja Swati Thirunal.

Take the case of the incident recounted in the introductory essay, when Rama Varma is said to have launched into a Rabindranath Tagore poem, while visiting Manna Dey. As the lights went out that evening, he stunned his host as he sang, Amir ei dehokhani tule dharo tomar oi debaloye pradip karo (Let my body be the lamp that lights up your divine abode).

A suave and soft-spoken demeanour disguises Rama Varma’s deep yearning for change, but with an equal predisposition to draw lessons from history. A conversation over lunch on a warm autumn Sunday reveals how much his own personal journey has been intertwined with the radical changes he has wrought in the royalty’s patronage of the arts. 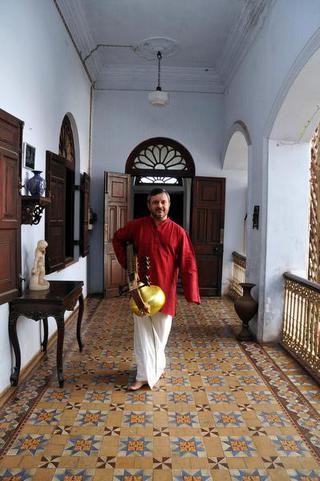 As a child, he was a close witness to his family home, Kowdiar Palace in Thiruvananthapuram, come alive with the constant visits of celebrated Carnatic musicians. Rama Varma’s great grandmother, Amma Maharani Sethu Parvathy Bayi, who lived and breathed music, meticulously selected his Guru — Vechoor Hariharasubramania Iyer — after interviewing all the musicians from Thiruvananthapuram. As the pupil advanced in his vocal lessons, he simultaneously took to instruction on the veena from K.S. Narayanaswami.

In the mid 1980s, it was an enormous leap of faith for the young royal to plunge into a career in music. As patrons of the arts themselves for centuries, the idea of nurturing home-grown talent was, perhaps understandably, beyond their wildest imagination for the royal family. When Rama Varma says, “It was music that gave a sense of purpose and direction,” there is an earnestness in his tone. That is perhaps where all his incessant energy lies — of discovering new compositions, the extensive travels in and outside the country and the hundreds of students he has engaged at workshops over the decades.

It took more than some persuasion from Prof. T.V. Gopalakrishnan to convince Rama Varma to perform on stage. The multifaceted veteran prevailed upon the family to recognise and nurture the youngster’s abundant talent. In a strange irony, the young royal’s musical career commenced on May Day in 1990, perhaps a foreboding of the many progressive interventions awaiting the Carnatic music community. It fell upon Rama Varma to rectify the contradiction of barring women artistes from performing at the annual festival of a female deity — Navaratri Durga Puja celebrations. Similarly, the remuneration paid to vidwans came to be matched with their professional dignity and recognition, thanks to Rama Varma’s intervention. 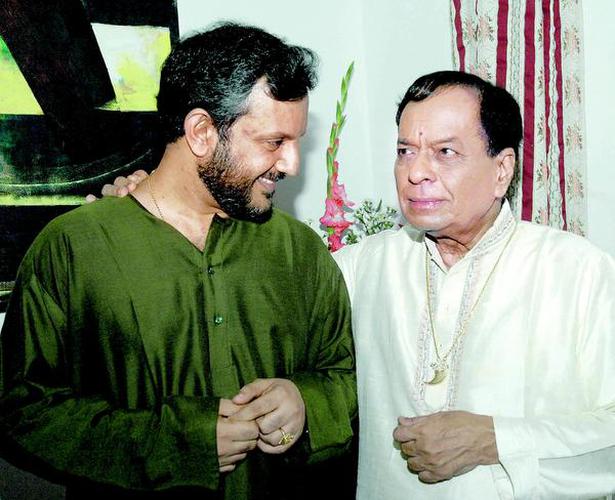 At the May 1 recital in Thiruvananthapuram, accompanying Rama Varma on the mridangam was TVG, with V.V. Subrahmanyam on the violin. After about 20 concerts in two months around the U.S. in 1991, Rama Varma did not look back.

If Rama Varma’s musical virtuosity holds his audiences in thrall, his lucid explanations around different songs appeal to their sense of history and intellectual curiosity. Somebody has to set the record straight, he says, about ‘Karunacheyvan endu,’ the popular composition of Irayaman Thampi, a court musician. Few music lovers know either that the tune currently in vogue was composed by Chembai Vaidyanatha Bhagavathar, in raga Yadukula Khambodi, or that the original was set in raga Sri. This example is all the more relevant in the light of the Thampi lullaby, whose adaptation was a subject of a recent controversy.

Or, consider his explanation of how Tyagaraja describes “people who experience Brahmanandam all the time” as ‘Kamalabhava sukhamu sadanubhavulugaka,’’ in ‘Endaro Mahanubhavulu’. In his Bageshri kriti ‘Sagara sayana vibho,’ M.D. Ramanathan describes Lord Vishnu as “standing majestically with Sri Devi and Bhoomi Devi. The relevant line there being ‘Baga Shri Bhoomi Sahithudai Velayu,’ cleverly incorporating the name of the ragam Bageshree in the process. The lone exception to Rama Varma’s narrative-filled recitals is the event at Thiruvananthapuram’s Navaratri Mandapam, where the singing is more an offering to the deity than a performance.

This urge to blend education, aesthetic sense and entertainment, he says, was inspired by the elaborate introductions he found on Western classical music albums he assiduously acquired as a teenager. Sharing such knowledge, says Rama Varma, is an imperative and a way of paying tribute to legendary composers and musicians. 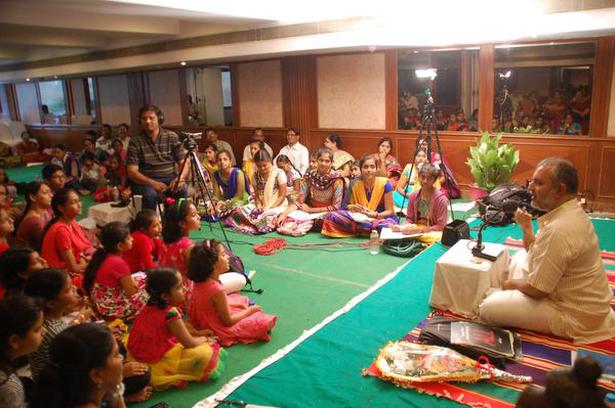 The vainika in him is not an ornamental appellation, avers the Bengaluru-based musician. “A singer, who does not play an instrument is much like a person who has merely learned to speak a language, say English, but cannot write a word.” Alternatively, the gains are akin to somebody with myopia wearing glasses. Learning an instrument sharpens one’s grasp of the multiple swarams that are at work in a short musical phrase. Without this advantage, one may stumble upon such intricacies after years.

Vocalists M.S. Subbulakshmi, M. Balamuralikrishna, Chembai Vaidyanatha Bhagavathar and M.D. Ramanathan from the yesteryear were adept at playing an instrument. Living veterans in this unique league are T.V. Gopalakrishnan, Neyveli Santhanagopalan, T.N. Seshagopalan, and S. Sowmya among others. Accompanying artistes can spot instantly whether the vocalist is conversant with an instrument and vice versa, says Rama Varma .

Rama Varma is too modest to recall a highlight from the unique bond, which he shared with his guru for a good 15 years. This scribe alluded to the typically maestro-like remark that ‘Balamuralikrishna was learning about Balamuralikrishna from Rama Varma’ only to be gently admonished by the latter. To Rama Varma, such reminiscences would remain eternally green.

Equally poignant is a fulsome tribute by the poet Sreekumar Varma in the commemorative collection, Breaking Barriers, Building Bonds. “If Rama Varma were to be deified in music and rigidified into an icon, in the coming years, let no one read of him and say he was a genius but a grumpy one, a path-breaker but a pompous one. Let no one disregard his charm and his naughtiness, let no one forget that his reading was parallel to his singing. His preparation was the platform for his erudition. Let his profile as a foodie not be pushed into the shadows, nor his probing interest in world music be dwarfed by the spectre of his Carnatic offering… Let us be quick to spot the twin contrasting spirit within him, irreverence and a deep spirituality.” Emilia Clarke ‘overwhelmed’ by fans support after opening up about aneurysms

‘Underworld’ movie review: A rather flat take on the world of crime