THIRUVANANTHAPURAM The state’s health department came under pressure on Monday after several doctors and staff of various medical college hospitals (MCH), which have been playing the lead role in the Covid-19 fight, tested positive or were sent into quarantine. The state reported 794 cases on Monday of which 519 people were infected through local contact.The number of healthcare workers who tested positive at the Thiruvananthapuram MCH rose to 20 after two more contracted the virus on Monday. As many as 49 doctors and 75 medical staff have been placed under quarantine so far. With the number of patients going up in the state capital — 182 on Monday, 170 of whom through local spread — the crisis at the MCH is a cause for concern. 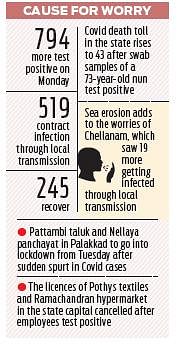 The functioning of various departments was also hit at Kozhikode and Kottayam MCHs. Situation looked better in terms of infection among healthcare workers in Thrissur and Pariyaram, yet many had to quarantined.MCH authorities are making special arrangements to avoid further Covid cases among health workers.Unconfirmed reports say that 14 patients and 10 bystanders also tested positive at the MCH in the state capital.

The hospital has decided to restrict the number of patients who can seek direct treatment to 50. Patients can consult doctors of all departments only from 9am to noon after buying a token. In non-emergency cases, people have to contact the doctor concerned over the phone.

The Kozhikode MCH is also on alert after a nurse with the nephrology department got infected while working in a non-Covid ward. “Though a few health workers have been infected, we’re making sure that no further incidents are reported,” said college principal Dr V Rajendran.In Kottayam, 19 healthcare workers were instructed to go into quarantine after two patients in the orthopaedic ward tested positive on July 16.

The ward which was closed for fumigation opened on Monday. On Sunday, a patient who was admitted for cataract surgery tested positive, following which 10 health workers were placed under quarantine. “We’ve made restrictions and cut down some of the services. A meeting of the heads of clinical departments will be held on Tuesday to formulate a strategy for addressing such situations in the future,” said Kottayam MCH resident medical officer Dr R P Renjin.

Thrissur MCH has so far remained Covid-free when it comes to its staff.“Recently, we split the services into Covid and non-Covid categories. Emergency services and other treatments, including surgery, will be conducted in the non-Covid zone,” said an official.

The results of 10 healthcare workers, who were under quarantine, turned negative on Monday, providing huge relief. Currently, 14 staff with the hospital’s forensic department are under quarantine.A doctor and PG student at Pariyaram GMCH were admitted to the Covid ward after they showed symptoms. Their test results are awaited. However, around 40 people who were in the student’s primary contact list have been placed under quarantine. Of them, 10 are PG students and others health workers.

UAE to help stranded passengers including 22 Indians at Dubai airport

MHA order on lockdown 3.0: Some activities in Green Zone may resume, travel remains banned till May 17