Of these eight critical districts where local transmission rate is above the state average, the situation in Thiruvananthapuram and Thrissur raises concern. 16.61 per cent of the total cases in Thrissur is now locally transmitted followed by Thiruvananthapuram with 15.38 per cent. In Wayanad, the local transmission rate is 30.13 per cent, but the total number of cases tested positive in the hill district is very low when comparing with other districts. 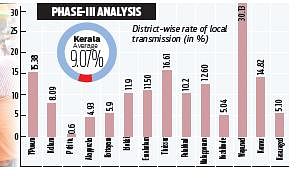 But the situation in Thiruvananthapuram is emerging as more serious where the source of local transmission of around 20 cases is not properly known, according to reports.  Further, the fact that around 20 health workers were infected in a total of 59 locally transmitted cases in Thrissur has shocked the health department.  K J Reena, former additional director (Public health) and present DMO, told TNIE that the virus spread among health workers in Thrissur was anticipated, but their number was beyond the expectation of the department. But now things are under control.

“We have prepared a projection based on the number of people coming to the state. As per the projection starting from the first week of May, after the eighth week the spread would be on the wane in the district,” she said. In the case of local transmission, she pleaded the public to comply with the standard operating procedure suggested by the health department.

However, there is a greater possibility for a margin of error in tracing the contacts of  locally transmitted cases, especially of those whose source of infection is not known, which will play a pivotal role in the silent transmission of the virus in the coming days, admit health experts. Sekhar L Kuriakose, member secretary, Kerala State Disaster Management Authority (KSDMA), said the KSDMA is better prepared to face the situation. Although the number is very high in the third phase, the rate of local transmission was higher in the first and second phases than the third phase. The agency is reviewing the preparedness each day after analysing the situation, he said.

On empty streets of northern Italy, gloom and some rainbows of hope