The Left parties questioned the Congress’s commitment to fight the BJP after Congress president Rahul Gandhi on Sunday chose Kerala’s Wayanad as his second seat, where the CPI is in the fray as part of the Left Democratic Front (LDF).

The BJP mocked the Congress. Its president Amit Shah said Mr. Gandhi fled from Amethi to escape accountability. “Rahul Gandhi has fled to Kerala as he fears the Amethi voters will seek an account [of work] from him,” he said at a rally in Bijnor, Uttar Pradesh. 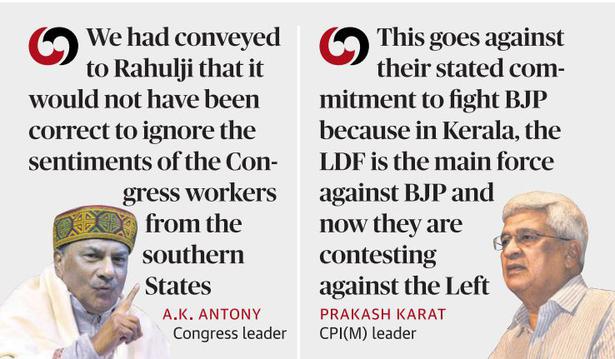 The Congress named Mr. Gandhi on its first list as its candidate for Amethi in Uttar Pradesh. And then came the demand by the party units in Kerala, Karnataka and Tamil Nadu that he contest from these States too.

“We conveyed to Rahulji that it would not be correct to ignore the sentiments of Congress workers from the southern States,” said senior leader A.K. Antony, who announced the decision. Wayanad was chosen, he said, because it is on the junction of three States.

Congress chief spokesperson Randeep Surjewala said the choice of Wayanad was not of political convenience. “Why did Narendra Modi leave Gujarat to contest from Varanasi? Was he in a weak position in Gujarat? These are immature comments,” he said.

The Left parties were cut to the quick and asked the Congress to spell out whether its primary target in this election was the BJP or the Left. “The decision to field Mr. Gandhi from Wayanad goes against their [the Congress’s] stated commitment to fight the BJP, because in Kerala the LDF is the main force against the BJP, and now they [the Congress] are contesting against the Left. The Congress has lost the plot somewhere,” the former CPI(M) general secretary, Prakash Karat, said. The Left would firmly fight Mr. Gandhi and the Congress-led UDF in the State, he said.

CPI national secretary D. Raja said the decision was devoid of logic. “Who is the Congress’s main political enemy? The Left or the BJP? Mr. Gandhi claims every day that he is fighting chowkidaar and the BJP, but they [the Congress] have chosen to contest against the CPI in Kerala. What message do they [the Congress] want to convey to the entire country,” he asked. The Congress should have instead chosen a seat in Delhi where the BJP is the key opponent, he said. 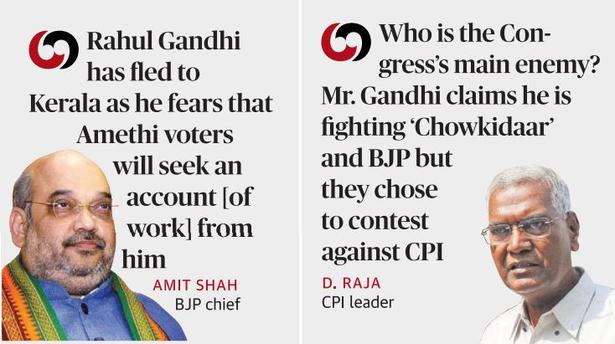 But the Congress said the decision was meant to send out a message to south Indians that they were deeply valued. “This is not a fight with the Left or the Right. This is a fight to espouse the aspirations of the people of south India, including the people of Kerala. This is a fight to give a befitting reply to those forces that are attacking the culture, language, the way of life and the deep connect between two portions of India,” Mr. Surjewala said.

The Congress is hoping that the decision will help to cement the support of the minority communities. The consolidation of the minority votes helped the LDF sweep the 2016 Assembly election.

“People of Kerala know very well who is fighting the BJP. Who is taking a firm and consistent stand against them [the BJP]. I don’t think there will be any confusion on that,” Mr. Karat said.

The demand that Mr. Gandhi contest from a southern State was first raised by the former Karnataka Chief Minister, Siddaramaiah. Soon, party leaders from Tamil Nadu and Kerala followed suit. To drive home their point, these leaders said Prime Minister Narendra Modi had contested from Vadodara and Varanasi in 2014. Mr. Gandhi’s mother and grandmother had contested, at least once, from two seats.