Portugal’s Jorge Costa, Mumbai City’s chief coach, has managed to guide the team to the Indian Super League play-offs in his debut season here. The former FC Porto captain under Jose Mourinho and member of the 2004 UEFA Champions League winning squad, has succeeded in moulding MCFC into a confident bunch and comfortable pushing forward into the rival half.

Costa’s team is ready to face FC Goa in the season five semifinals. Asked about his expectations in the knockout phase, he said: “The first goal, of finishing in the top four, we (have) achieved. Compared to the beginning for me and also the players, and to the stage reached now, we tried to make different kinds of things work. The players understand what needs to be done.”

MCFC ended in third place, winning nine games out of 18 besides three draws in the league. Asked about the task ahead against FC Goa, he said: “The last two games we played against them, the tally was 0-7. We need to change a lot of things of course if we want to play a final.” 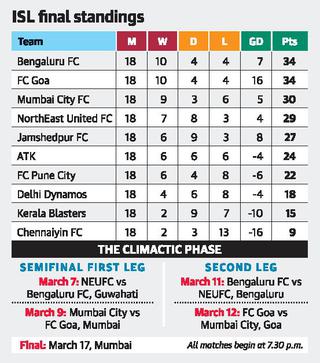 The coach, surprised at the football levels in India, refused to credit individual players for the team show. “It took some time for me to understand and also make myself and players familiar to this new reality. I was surprised in a positive way about the quality of teams and players (in ISL).”

Replying to a query if he expects Machodo, Sougou, and Bastos to influence the team in the play-offs, he observed: “They have the experience in these situations and are working with the other players, who would have learnt something. I respect all players and see football as a team sport.”