Haunted by images of migrant labourers in India walking home during the lockdown, two Indian artists in Europe shared their experience by an arduous journey of their own, walking through The Netherlands, Belgium and France and covering 348 km on foot.

The two then walked for 13 days, sharing anecdotes from the migrant experiences in India to whoever joined them on the road. On July 15, they ended the piece, titled ‘The Art of Walking’, at a refugee camp in Calais, France, where large numbers of migrants wait to be let into the UK.

“The artwork is created by us but is not an original work. The action has been done by many migrant workers in India in very bad conditions by walking back home. This walk sees them as co-workers. The work will be giving royalty to 150 families of labourers with funds that can support them for four months,” Tiwari, who has been working in Amsterdam since September 2019, told The Indian Express over the phone.

Tiwari and Thapar walked almost 30 km every day, the route winding through beaches and forests, bridges and highways. Once, a biker got off and walked alongside them. Another time, a woman in The Netherlands told them of her parents who had migrated from Baghdad. Passers-by and pedestrians exchanged notes on movements and belonging. Researchers, artists and scholars in the three countries turned out for the walk. In the evening, the two would rest at the homes of well-wishers or in tents.

Tiwari heard about the migrant crisis from the news as well as conversations with his family in Balrampur, Uttar Pradesh. “My father works in the forest area and a lot of labour comes from Nepal. Once, when I was speaking to him, he was agonised that his staff would have to walk for days to reach their homes as there were no trucks or other transport available. I began to think, ‘What does it mean to be a migrant?’ The artwork followed from there,” says Tiwari.

Thapar, who comes from Punjab and has been in The Netherlands for five years, said, “Millions and millions of hands go into churning the soil that makes up the bread basket of India. This walk was a way of giving back to them, seek awareness of the issue when the media moves to other topics and also interrogate what it means to be a migrant artist in Europe.” 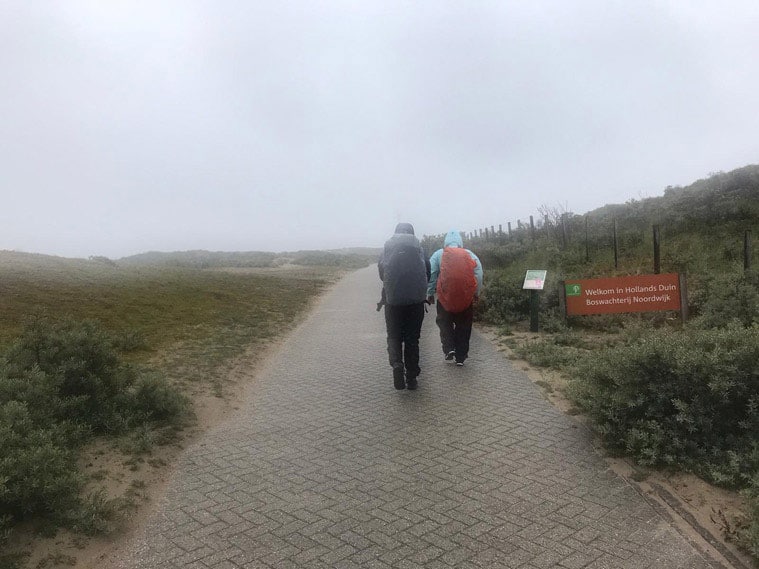 “The artwork is created by us but is not an original work,” Tiwari, who has been working in Amsterdam since September 2019, told The Indian Express over the phone.

Their journey ended with a simple meal of rice and dal that Tiwari, Thapar and a few others cooked for the refugees at Calais. After eating, everybody stood at the edge of the water and watched the coastline of the UK shimmering with the promise of a better life and safety.

Sinta Wibowo, an arts organiser from Belgium who walked with the two artists from Knokke to Ostend for nine hours, wrote on Facebook, “Like Pankaj and Abhishek, they (the migrants) understood that it is difficult to start walking again after stopping, with the body aching painfully after it is put to rest. Whatever the motivation of migration, it takes immigrants a great deal of effort and hardship to provide their basic needs, like shelter, food and safety. So, start regarding migration as movements of survival, away from even more hardship at home.”