Kapila Venu, who will be in Coimbatore for Svanubhava 2019, grew up in an environment soaked in art and music for which she is forever grateful

She was seven when she started training and is now one of the foremost exponents of Koodiyattam. The daughter of maestro G Venu and Mohinattam danseuse Nirmala Paniker, Kapila Venu grew up in an atmosphere devoted to the arts, for which she says she “will be forever grateful to the universe. Every day, and almost every topic under discussion, had to do with art and aesthetic and I think that moulded me into who I am.” She is also a non-traditional performer of Nangiarkoothu and has learnt Mohniattam as well.

A disciple of the legendary Ammanur Madhava Chakyar, she has also studied under her parents, Usha Nangiar and Kitangur CN Rama Chakyar. She describes her childhood and learning process as “organic and natural” and regrets that another generation cannot experience something similar. Despite being “profound in his practise of the art”, Ammanur Madhavar Chakyar was both simple and detached in how he lived, she recalls, and her favourite memories are not about class but about “going to look for him in the paddy fields where he would be with his cow and then walking back to class with him and listening to stories.” 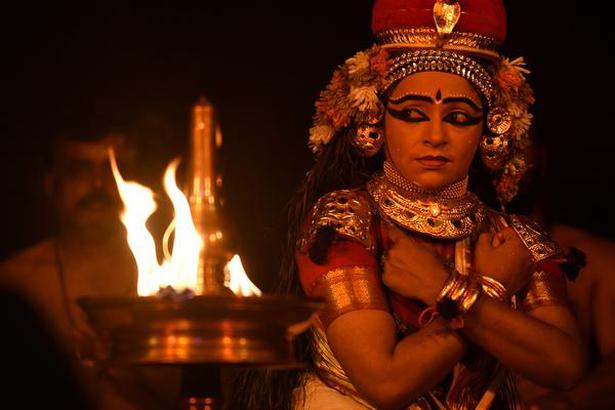 Kapila’s repertoire is drawn largely from Sanskrit texts and mythology and she selects her pieces “if it touches me or if it moves me. But there are also instances where it’s not really love at first sight. Then, I make an effort to fall in love with the text step by step through deeper understanding and make it close to me through new interpretation.” She is known for her interpretation of female roles like Sakuntala in Sakuntalam, Urvashi in Vikramorvashiyam, Sita Parityagam based on Kalidasa’s Raghuvamsam, and a solo performance of Saundariya Lahiri. She has also performed the Narasimhavataram and Kurmavataram based on Jayadeva’s Gita Govindam.

Apart from this, she has danced pieces choreographed by Japanese dancer Min Tanaka and storytelling performances in collaboration with Swedish director Peter Oskarson and English actor Arabella Lyons. She ranks her collaboration with Min Tanaka as “the most memorable” and one that had the “strongest impact” on her. “I was fortunate to spend long durations of time training, travelling and working on two performances with someone as wise, deep and intense as him.” Experimental dancer Wally Cardona was another great inspiration. “If I were to put it as simply as possible, here was a dancer with a very rich body that you couldn’t take your eyes off.”

Kapila is also very involved in teaching the next generation of artistes. She is the Director of Natanakairali Research and Performing Centre for Traditional Arts at Irinjalakuda, a staff artiste at Ammanur Chachu Chakyar Smaraka Gurukulam and visiting faculty at National School of Drama, New Delhi and at Intercultural Theatre Institute, Singapore. She will not pick between being a performer and a teacher. “I love both roles equally,” she says. “On stage, I feel empowered and in control. However, as a teacher, nothing feels better than walking into a space filled with students looking at you with respect and love.”

She is a practitioner of an ancient art, which she describes as an ocean. Her generation “is still understanding the nuances of the art, she says, adding that “a next generation of bright young bodies and minds if well trained and set free from certain constraints of the tradition can go a step further and explore the multitude of possibilities hidden in this vocabulary.”

Finally I ask, if not a performer…? “I would have still been a part of the art world as an arts manager,” she replies. “I would have continued my father’s work on revival of disappearing traditions more rigorously. I may have also been an animal and wildlife activist, tree planter or a farmer.”

‘Devarattam’ review: a violent film where the violence serves no purpose

Why elections are great for some stand-up artistes