NCP and Congress lead a mammoth alliance in the State where discontent over reservation and farm distress is rising.

As Maharashtra prepares for a four-phase voting in April, a curious calm prevails over the political camps in the State.

With 48 constituencies, Maharashtra is the State with the second largest number of Lok Sabha seats.

In 2014, the alliance of the BJP and the Shiv Sena swept the polls by winning 42 seats. It unseated the Congress even in Nandurbar in the north and Sangli in the west, seats the party had never lost since 1962. The Congress won just two seats. Its alliance partner, the Nationalist Congress Party (NCP), bagged four.

In 2019, Maharashtra is set to effectively witness a direct fight between the ruling and Opposition alliances in a majority of the constituencies.

During the past four-and-a-half years, the Shiv Sena conducted itself more like an Opposition party. From demonetisation to the State’s farm loan waiver, it slammed the Chief Minister and the BJP with such intensity that the Congress and the NCP ended up being mute spectators.

After initially announcing plans to go it alone, the Sena ultimately joined hands with the BJP, thanks to consistent efforts by the BJP leadership including party president Amit Shah and Chief Minister Devendra Fadnavis.

The Opposition led by the Congress and NCP, on Saturday, held its first joint press conference where it announced an alliance of 56 political parties and organisations to take on the BJP-Sena combine. The alliance includes the Swabhimani Shetkari Sanghatana, led by farmer leader and MP Raju Shetti from western Maharashtra’s Hatkanangle seat. Mr. Shetti, who was with the NDA in 2014, left the BJP-led combine two years ago, protesting what he termed the neglect of agrarian issues by both the Central and State governments. The Congress and NCP would contest 24 and 20 seats respectively, with the SSS vying in two, and the Bahujan Vikas Aghadi and Independent MLA Ravi Rana’s front contesting one each.

The Congress and the NCP, however, struggled to reach a consensus on some seats. As a result, the younger generation from the families of some senior Congress and NCP leaders quit their respective parties to join the BJP. 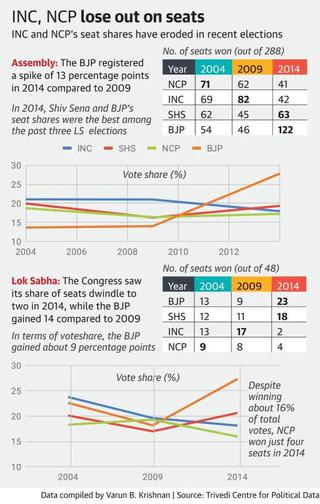 Prakash Ambedkar, the grandson of B.R. Ambedkar, joined hands with the All India Majlis-e-Ittehadul-Muslimeen (AIMIM) to form the Vanchit Bahujan Aghadi (VBA), which is contesting all 48 seats. The VBA claims to give voice to the deprived groups.

The Maharashtra Navnirman Sena, which decided not to contest, will, however, be campaigning against the BJP.

The BJP-Sena combine has indicated that the entire campaign will revolve around the air strikes on Pakistan after the Pulwama terror attack, Prime Minister Narendra Modi’s standing as a leader and Hindutva.

NCP chief Sharad Pawar is turning out to be the key strategist for the Congress-NCP combine. The Opposition is trying to keep the fight local as it lacks a leader with a pan-Maharashtra appeal.

The BJP claims to have successfully managed the agitation by the politically influential Maratha community by giving them reservation, which is currently being reviewed by the court. Among the Other Backward Classes (OBCs), the Vanjaris, the biggest in numbers, have always been with the BJP due to the influence exerted by Gopinath Munde.

And while Dalits in Maharashtra have never voted as a block due to various factions within the Ambedkarite movement, the largest chunk has always been with the Congress.

At a time when the discontent among the OBCs, Dhangars, tribes and Muslims could have jeopardised the BJP’s chances, the VBA’s emergence has come as a shot in the arm for the ruling party.

A farm-loan waiver announced two years ago is yet to be completed and the exact number of beneficiaries is still changing. Maharashtra is staring at yet another drought despite the State’s claim that the flagship Jalyukta Shivar scheme has been a success.