In Theni district’s Andipatti, where a by-election is scheduled for April 18, the Income Tax department seized unaccounted cash packed in envelopes meant to be distributed to voters.

The Income Tax department’s Investigations Wing on Wednesday seized a sum of ₹1.48 crore as accounted cash, even as police opened fire in the air to prevent miscreants from stealing the money.

The seizure came as the I-T department concluded their searches at Andipatti, Theni.

According to the taxmen, the cash was neatly packed in 94 packets/envelopes on which the ward number, number of voters and the amount at ₹300 per voter was written. All the wards mentioned are within the Andipatti assembly segment, which will go to polls on April 18.

The premises belonged to a functionary of the Amma Makkal Munnetra Kazhagam (AMMK) party. In addition, the AMMK party office was found functioning on the ground floor. 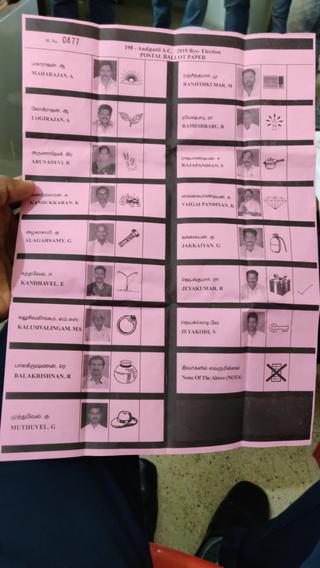 A statement from Mr. Murali Kumar said that a sworn statement of the person present in the premises was recorded. He stated that ₹2 crore in cash was brought in there for distribution to voters in Andipatti panchayat union area on April 16.

Initially, a group of party workers overpowered the flying squad standing guard outside the premises, broke open the door and snatched cash packets. Police had to open fire in the air for the tax men to continue their job. The miscreants fled with a few packets. All the remaining cash in 94 bundles (₹ 1.48 crore) was seized along with the envelopes.

A postal ballot paper for Andipatti assembly by-election, which was already marked for the AMMK candidate, was also found in the premises and was seized.

The district collector and SP reached the spot and supervised the security. The district police has filed an FIR against a number of persons.