The Congress on Tuesday released its manifesto for the 2019 Lok Sabha election, and promised to “create wealth and guarantee welfare” to every Indian citizen by focussing on jobs, agriculture, health, education and welfare for women.

It offered a separate budget for farmers, besides promising to make non-repayment or default on a farm loan a civil liability instead of a criminal offence, come out with a revamped goods and services tax (GST) and give new start-ups the liberty to operate for the first three years without any permission.

The manifesto promised to pass the Women’s Reservation Bill, reserving one third of the Lok Sabha and State Assembly seats, in the “first session” of the new Lok Sabha.

The party talked of “eshewing muscular militarism” and start the process of dialogue to win the hearts and minds of the people of Jammu and Kashmir.

It promised to work with the international community and take steps to “isolate Pakistan and force them to give up its terror infra- structure”. 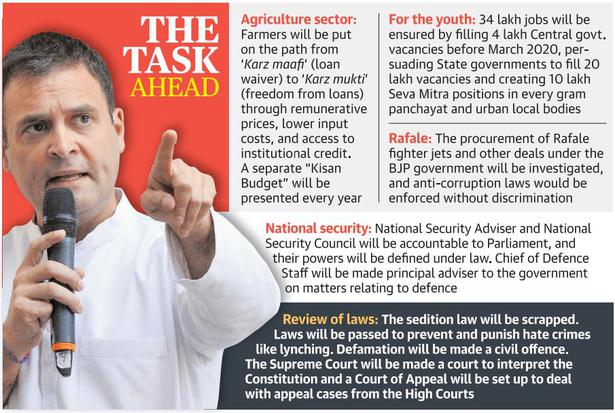 The Congress proposed a new law to deal with hate crimes like ‘mob-engineered lynchings’ and proposed legislation to automatically disqualify lawmakers who switch parties and bar them from elections for two years.

The 54-page manifesto, titled We Will Deliver, was released by party president Rahul Gandhi, former Prime Minister Manmohan Singh, UPA chairperson Sonia Gandhi and former Finance Minister P. Chidambaram among others. “When we started this exercise about a year back, I gave two instructions to Mr. Chidambaram and Rajeev Gowda. I said this is not going to be an exercise of preparing a manifesto in closed rooms. I know the Congress has a lot of expertise but the manifesto should reflect the wishes of the people of India,” said Mr. Gandhi after the formal release. “And the second point I said that whatever is going to be in this manifesto has to be truthful. I don’t want a single lie because we have been hearing a large number of lies spoken everyday by our Prime Minister,” he added.