A tri-cornered contest beyond prediction in the capital

The electoral outcome in the Thiruvananthapuram Lok Sabha constituency largely hinges on the possible vote swing from within the Nair community and the minority sections, including the influential Nadar community. 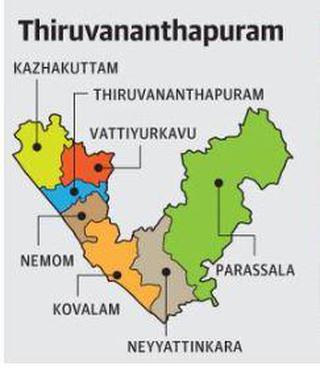 As has been the case in the 2014 general election, the present one too is set for a tri-cornered battle beyond prediction. The incumbent Congress MP Shashi Tharoor had then defeated veteran BJP leader O. Rajagopal, but not before witnessing tense moments to emerge victorious by a margin of 15,470 votes.

This was a drastic fall from the margin of 99,998 that Mr. Tharoor had secured in the 2009 polls when he defeated his rival P. Ramachandran Nair of the CPI. Previously, Thiruvananthapuram has swung between the Congress and the CPI in equal measure, denying either coalitions a sway over the constituency.

The BJP has put its best foot forward by fielding former State president Kummanam Rajasekharan, whose candidature was finalised at the behest of the RSS after he resigned as Governor of Mizoram. Through its strategy, the NDA counts on winning a major chunk of the Nair vote base by harping on the Sabarimala issue.

The LDF hopes to better its performance by banking on the popularity of veteran CPI leader C. Divakaran in the region. The coalition was also confident of tapping into the vote base in coastal areas through its proactive relief measures in the aftermath of Cyclone Ockhi and various rehabilitation initiatives for the fisherfolk. However, perennial inadequacies, including drinking water shortage in the region, could also have an impact.

Under the circumstances, the UDF braced itself for a stiff challenge with the rival camps primed to eat into their traditional vote banks. Besides, the Nadar community, a crucial-yet-unpredictable force in the Parassala, Neyyattinkara and Kovalam Assembly constituencies, could hold the key on who emerged victorious.

“I can point to a number of accomplishments that have benefited the constituency. I could overcome 40 years of obstacles to ensure the fast progress of the NH-66 bypass development from Kazhakuttam to Kaliyikkavila,” says a confident Mr. Tharoor.

The BJP pooh-poohed the claims and maintained that he was riding on the achievements of the NDA. “The MP has clearly proved to be ineffective. The constituency benefited more during the NDA rule,” BJP State spokesperson M.S. Kumar said.

CPI(M) district secretary Anavoor Nagappan accused Mr. Tharoor of failing to deliver promises and colluding with the BJP in privatising public sector institutions. The MP also ditched the constituency at times of crises, he alleged.