New solar carport for the renovated domestic terminal to be commissioned

Chief Minister Pinarayi Vijayan will inaugurate the renovated domestic terminal (T1) of Cochin International Airport Limited (CIAL) on December 12. He will also inaugurate the enhanced solar power generation facility of 40 MWp at the airport on the same day.

A communication from CIAL said here that this was a ‘new chapter in its growth.’ The airport, which is the first in the world to run fully on solar power, handled a crore passengers during 2017-18.

The renovation work of Terminal 1, which was earlier used for international operations, was started about 18 months ago. It has now been reconstructed to global standards and will be operational by the third week of December, said the communication.

CIAL said that in contrast to the architectural models of other airports in the country, it was able to materialise the renovation of Terminal 1 in line with Kerala’s traditional heritage. ‘This will make it a heritage airport terminal.’ The terminal blends traditional architectural style with modern airport facilities, the communication said citing airport managing director V.J. Kurian. 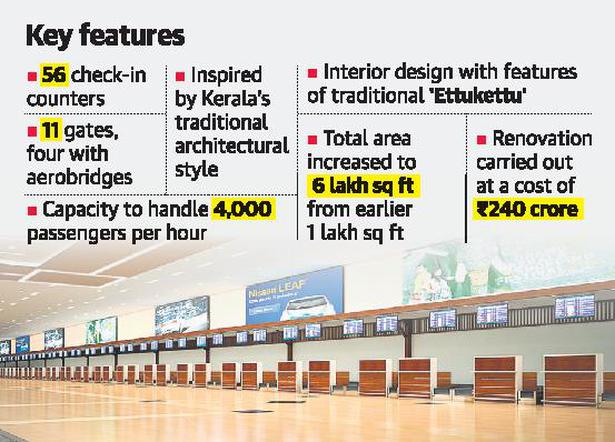 There has also been a steady growth in the number of domestic passengers. The domestic aviation market has witnessed big growth. The national year-on-year growth is 18% whereas CIAL had seen a growth of 24%, said Mr. Kurian.

CIAL handled five million domestic passengers during 2017-18. The numbers are expected to double over the next five years.

The Kochi airport had won several awards, including the Champion of Earth award instituted by the United Nations, for its achievements in solar power generation.

The total capacity of the solar plants is 30 MW. With the Terminal 1 getting ready for operation, the production capacity will be increased to meet the new requirements. The project to install solar panels on the roof of the car parking facility at Terminal 1 is part of the efforts.

With the commissioning of the new solar carport for Terminal 1, the total installed capacity of the carports will be 5.1 MWp.