Prime Minister Narendra Modi, who reached the ashram a few minutes earlier, showed Trump and the U.S. First Lady ‘Hriday Kunj’, a room inside the ashram where Gandhiji and his wife Kasturba lived.

Modi explained the importance of this place in India’s freedom struggle.

During the visit, Trump and Melania also tried their hands on the khadi spinning wheel, also known as charkha.

Before leaving, Trump wrote a message in the visitors’ book of the ashram. 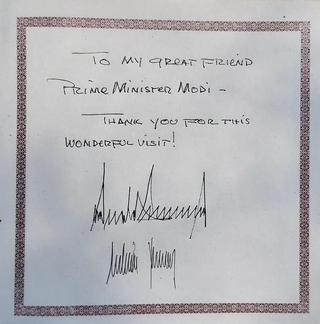 “To my great friend Prime Minister Modi – Thank you for this wonderful visit,” wrote Trump and signed the message.

It was also signed by Melania.

The Trumps were in the ashram for around 15 minutes.

Modi also presented “Three Wise Monkeys,” a larger version of the one belonging to Mahatma Gandhi, as a memento to the U.S. president.

Trump and Modi then resumed their roadshow till Motera stadium.

Ashram trustee Kartikeya Sarabhai, who welcomed Trump and Melania with a khadi stole, told reporters later that the Trumps told him how much they enjoyed their visit to the ashram.

“They said the place gave them a sense of peace. They said they understood the symbolism of this place. The Central government gifted them a statue of Gandhiji’s Three Monkeys, conveying the message of speak no evil, see no evil, hear no evil,” Sarabhai said.

He said the Ashram trust gifted the Tumps a special edition of Gandhiji’s autobiography, a pencil drawing of Gandhiji and a charkha.