The unique pantheistic art form of the Theyyam faces increasing threats of gentrification and Brahminisation, thus paving the way for the destruction of the sacred groves where it was born

There’s a lake underneath the forest where a crocodile runs riot. Thus goes a myth about one of Kerala’s sacred groves, and it’s a myth that is firmly believed by the people who inhabit the area around the grove. And aspects of the myth colour the local Theyyam performed there.

There has always been an unmistakable umbilical link between the dance form of Kerala called Theyyam and nature. A Theyyam is a ritualistic performance where pantheistic deities are summoned to the body of the performing man, one who is almost always from a subaltern community. Each of these instances of “possession” is rooted in a unique local myth, which in turn is rooted in the ancient sacred groves of Kerala called kaavu. Each kaavu is a small rainforest, and these were in abundance in the State until some years ago.

In an extraordinary play between culture and nature, the grove nurtured the dance form and the dance form was instrumental in arresting the destruction of the groves even when development and modernity came knocking. Theyyam’s accoutrements have always been drawn from nature — such as garlands and decorations of ripe areca nuts, flowers, leaves and fruits — just as the biodiversity-rich wilderness of the groves has been the home of the pantheistic deities that thrived in the Malabar region.

The ritualistic art form is ancient, predating organised Hinduism and harking back to a time of tribal animism. Over the years, Hindu elements have been slowly taken in and adapted to the ritual. This might well have enriched it but might also spell the death knell for a certain vital attribute of the Theyyam.

It was always a symbiotic relationship. The deities — goddesses in most part and hereditarily embodied by designated men from specific communities — towered over a feudal society with its undivided landholdings. The land and the dance and the myths nurtured each other. The people of the region had complete and sanguine faith in the god or goddess who presided over the region, and the sacredness attached to the deity was extended to the grove, thereby giving it a protective cover. The hereditary nature of the Theyyam has meant that each custom and traditional practice is carefully protected, fostered and handed over. At a recent performance, for instance, of the Karimchamundi Theyyam at the Tharanthatta Karimchamundi shrine in north Malabar, Naranthan, a veteran performer, spoke appreciatively of how the younger generations after him even today reverently observe every custom before transforming into the theyyam.

My village in north Malabar has a kaavu. The presiding theyyams — Kadayankathi and Pethalan — inhabit the perennial darkness of the dense woods, entertaining a particular fondness for the mysterious hours of dusk or high noon. None dared disturb the sacred groves at these times, unless it was to request an exorcism.

The aloof magnificence of Kadayankathi and Pethalan obscured their myths and origin stories, but the devout knew they had unmediated access to these deities when they manifested as theyyams during the days of the ritual.

On a recent trip to the kaavu to pay respects to the theyyam during their annual visit, I was dismayed to find that the surrounding forest had all but disappeared. When I commented on this, a neighbour remarked, completely missing the irony, that the theyyam would have more room to perform if the forest was cleared further.

When the Theyyam was a sacred ritual, its performance was in the nature of an offering to the deity. And the forest, the deity’s domain, was the performance space. Slowly, over the years, as the Theyyam has increasingly been marketed as a tourist attraction, it has become less ritual and more entertainment. This has meant that the dance aspect of it has taken precedence over the space and indeed over the sacred itself. And the recognition of Theyyam’s deeply symbolic character has begun to give way to an understanding of it merely as an art form. This, in turn, has impacted the sanctity of the forests or kaavu, and they are cut down carelessly.

Besides the ecological consequence of such a development, a second threat looms large over the pantheistic origins and identity of Theyyam. A gradual Brahminisation has uprooted the primal spirits from the rock and the wood of the sacred groves they used to inhabit. Unlike Brahminical temples, the kaavu features no priestly rituals or lighting of lamps during non-Theyyam times. And the rituals are performed by the people themselves, not by priests. Thus, the sacred grove remains closed for most of the year, which allows the wilderness to grow back. The theyyams, however, are now lodged in brick-and-mortar temple structures outside the sacred grove — and worshipped through rituals unfamiliar to the elemental deities, and their favour is mediated by the priestly classes. The evicted theyyam takes with it the sacral protection extended to the grove.

From grove to temple

A grove located in Kasargod district in North Kerala — the Periya Bhagavathi kaavu — illustrates the changes occurring in and around all of Kerala’s sacred groves. Kaliyattam (one of many kinds of ritual Theyyam) had ceased for several years at this grove, which was situated on a property owned for generations by a feudal lord. At the insistence of the villagers, the ritual was revived. The villagers consulted an astrologer for advice on the rituals to be followed. The astrologer divined that the gods and goddesses were cramped inside the confines of the sacred grove. The only solution was their re-consecration in a temple complex outside the grove. A priest was given the charge of invoking the favour of the gods and the village celebrated the consecration with an annual Kaliyattam. 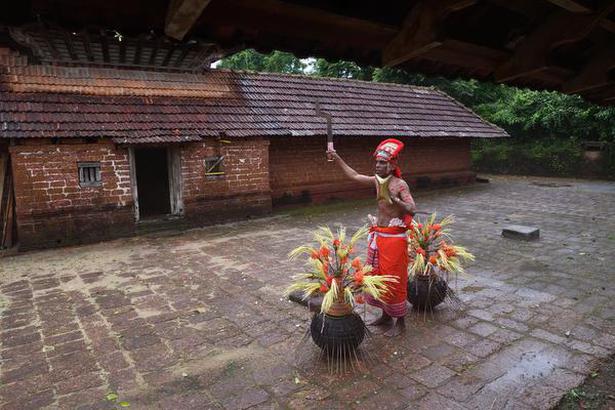 Worship of ancestors, trees, animals, serpents, are all part of the cult.   | Photo Credit: Thulasi Kakkat

And thus the kaavu faded from the Periya Bhagavathi kaavu, and it is certain to become the Periya Bhagavathi ‘temple’ in no time. This story is not restricted to Periya Bhagavathi, but has recurred across sacred groves all over North Kerala. You have to look no further than Nandapuram Sreekrishna Temple, where the Vishnumoorthi Theyyam and the Gulikan Theyyam hold annual performances. Unsurprisingly, a recent consultation with the astrologer again revealed that the Theyyam ritual itself ought to be replaced with more conventional Brahminical temple rituals to obtain divine favours. Like the kaavu, will the ritual performance too fade or morph into something else? Only time will tell.

Meanwhile, the theyyam that has for so long watched over the land and its denizens must come to its own rescue. The Brahminisation and the loss of the sacred grove have not escaped the notice of the theyyam, I observed. During a recent performance, the Kadayankathi bellowed at the village elders: ‘Where have my groves gone?’ The answer perhaps lies in a question the Pethalan posed during the performance to his gentrified cousin, Palenthayi Kannan (originating from a local myth, but whose identity is now subsumed by the Narasimha avatar of Vishnu). “Did you christen me Kaatumoorthi (primitive forest deity) because you found the name Pethalan uncouth?” he asked.