Various airlines in the country are likely to see the total number of passenger trips grow more than fourfold from 243 million in financial year 2020 to 1.1 billion in 2040.

During the same comparative period, the total number of aircraft is likely to increase from 754 to 3,342, according to an industry forecast by aviation consultancy Centre for Asia Pacific Aviation (CAPA). 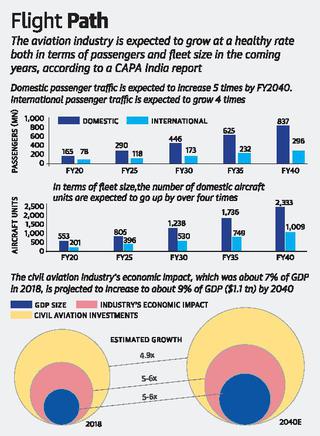 The domestic aviation industry could attract an investment of $250 billion over the next two decades, more than five times the investment seen by the sector in the past 15 years at $48billion. Of this, aircraft acquisition and airport development will account for 90% of the expenditure — with an estimated $161 billion- $173 billion on new planes and $60-65 billion on brownfield and greenfield airports, the report noted.

The economic impact of the growth in the aviation sector is expected to continue to increase at a faster rate than the GDP. Its contribution to the GDP is also likely to increase from 7% to 9% or $1.1 trillion.

Twitter co-founder Evan Williams steps down from company board