It seemed like harvest time at Alangad Junction in Paravur as people started arriving with all sorts of agricultural produce at around 11 a.m.

A middle-aged man brought a bunch of Poovan banana, while another one carried with him a few freshly plucked green mangoes. An elderly woman walked in with a clump of spinach while a young girl arrived with a bunch of Kanikonna flowers.

Suddenly, the crowd broke into cheers as an open jeep carrying P. Rajeev, the LDF candidate, appeared on the scene followed by sloganeering.

After greeting the crowd and accepting the farm produce, the candidate addressed the voters, touching upon Jaiva Jeevitham, the organic farming campaign, he led in the district.

“Together, we produced organically grown vegetables. Together, we overcame the fury of nature and rebuilt Kerala. Now, it’s time for us to stand together to create better life for the people and rebuild the country,” he said. 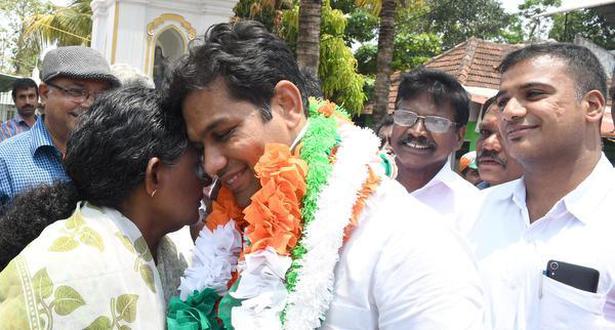 UDF candidate Hibi Eden being received by his supporters at Njarakkal

This election, said Mr. Rajeev, is all about protecting India and its Constitutional values. The very idea of India is under siege, he explains.

For Mr. Rajeev and the CPI(M), this is a mission to reap political support in Ernakulam, where he takes on Congress candidate and Ernakulam MLA Hibi Eden and BJP candidate K. J. Alphons.

For the Congress, the challenge is to retain the seat while the BJP is vying to carve out a niche for itself in the constituency.

The Congress, which woke up from the initial slumber, is working overtime for its candidate. The candidature of the young Eden has infused energy into its system.

“Ammachee, please prey for me,” cupping the palms of the elderly woman Achamma, who waited in the Pulayad Road area to meet him, he appealed. “We need to restore the idea of India and be with the Congress and the UDF in the process,” exhorted Mr. Eden in his brief address.

Clad in white khadi shirt and dhothi, Mr. Eden moves along with the crowd with ease and establishes personal rapport with the voters.

“We are highlighting the issues the country faced under the NDA regime and also the failures of the LDF government. The voter response is tremendous and the situation is in favour of the Congress,” he said.

Mr. Alphons never seeks vote for himself but for Prime Minister Narendra Modi.

“Give Modiji one more chance and I am contesting as his representative,” listing out the schemes the government has rolled out for the people, the former bureaucrat appealed to the voters.

“We are inviting tourists to Ernakulam. But the city is stinking. We need to clean up the district and develop Ernakulam as an international tourism destination,” Mr. Alphons spelt out his vision for the constituency.

He hoped voters would stand by him to fulfil his dream about Ernakulam.