THIRUVANANTHAPURAM: The Covid fight in the state capital has suffered a huge setback after 18 healthcare workers, including seven doctors, of the Medical College Hospital (MCH) tested positive over the past six days. Eventually 150 staffers were asked to go into quarantine. 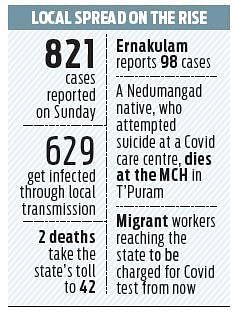 The development will further stretch the system in Thiruvananthapuram district, where local spread and community transmission in coastal areas have resulted in an alarming spike in the number of cases.
Thiruvananthapuram accounted for one-fourth of the 821 cases reported in the state on Sunday. Of the 222 new patients in the district, 202 contracted the virus through local transmission.

The district disaster management authority has announced that the corporation would remain under triple lockdown until July 28. Two medical officers and four PG students who were not deployed for Covid duty were among the newly infected at the MCH.

The doctors and other staffers who contracted the virus had attended to patients who sought treatment at the general, surgery and orthopaedic departments.

Sources said that many departments at the MCH would be closed down. Minister Kadakampally Surendran, however, said the functioning of the hospital will not be affected as alternative arrangements have been made. “Right now, there isn’t any crisis. The government has made all arrangements,” he said.

MCH superintendent Dr M S Sharmad said: “Some of the healthcare workers tested positive and around 150 of their close contacts were sent into quarantine. But it won’t affect the hospital’s normal functioning. We’ve a pool system. There’s a Covid pool, non-Covid pool and reserve pool. As some are under quarantine, the workforce needed will be taken from the reserve pool,” said Sharmad.P2